As one of Europe’s most up-and-coming holiday destinations, a lot changes in a year in Malaga. In this blog post, we look at what’s new in Malaga in 2017.

The huge influx of tourists over the last couple of years has led to a shortage of hotels in Malaga. It therefore isn’t surprising to find plenty of new projects on the horizon for the city in 2017.

Gran Hotel Miramar – the first 5-star GL hotel in Malaga officially opened at the end of last year, but this inauguration was only partial – just 50 of the 200 rooms were available. 2017 will see the full opening and operation of this emblematic hotel. Watch this space for a full blog post dedicated to what promises to be one of the best luxury hotels in Malaga. 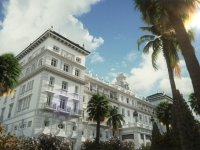 Calle Larios 10 – an undisclosed investor bought the 7 floors at number 10 Calle Larios to create a 4-star boutique hotel. Despite being the busiest street in Malaga, there’s currently only 1 hotel in Calle Larios – Room Mate Larios at the Plaza de la Constitución end.

Marqués de Solesio Palace – work is about to start on the total refurb on this historic palace opposite the Church of Santiago on Calle Granada. The project will create a 4-star hotel in a key location in Malaga city centre. The new hotel will be just a stone’s throw from all the major attractions in Malaga and bring a welcome new lease of life to this part of town.

[box type=”note” style=”rounded” border=”full”]Ready now – check out the new bars in Calle Beatas behind the Palace. Along with the well-established Los Patios de Beatas, there are several good tapas venues. We like La Esperanza de los Ascurra with an Argentinian flavour and Madame Suzanne bringing a taste of France to Malaga.[/box]

Hotel Suites del Puerto – work on the iconic skyscraper is due to start at the end of the year. Originally planned as a 5-star establishment, this new hotel in Spain will actually have 4-star status. Read more about it here.

The art museums in Malaga are among the best in Spain with something for everyone from lovers of the old masters to cutting-edge modern art enthusiasts. This year Malaga art museums are pulling out all the stops. Here’s a taster of the art exhibitions in Malaga over the next 12 months:

A brand-new attraction in Malaga, this giant art and archaeology museum has yet to host a temporary exhibition. However, with literally thousands of art works and archaeology artefacts in its storerooms, expect some interesting exhibitions from spring onwards.

[box type=”info” style=”rounded” border=”full”]Look forward to – the opening of the top floor restaurant with some of the best dining views in Malaga.[/box]

New in Malaga in 2017 will be an entirely new collection at the Russian Museum. The brand-new set of paintings arrives at the beginning of February. Expect room after room of exceptional Russian art works as well as some innovative exhibitions. Kandinsky will star during 2017 as well as a look at the history of the Romanovs.

One of the most visited attractions in Malaga will continue to provide amazing art exhibitions in 2017. Starring this year is ‘Bacon, Freud and the London School’ in collaboration with the Tate Modern. See this from 26 April.

Also new in Malaga in 2017 is a refurb of the main exhibition rooms at the Picasso Museum. While this is going on, visitors will be able to feast their eyes on 38 Picasso masterpieces. From mid-January.

Like the Russian Museum, the Pompidou Centre will also be all-change in 2017, although we’ll have to wait until December for the new works. These will focus on Delaunay, Kandinsky, Picasso, Miró, Saura, Le Corbusier…

An exhibition of Philippe Starck’s work arrives in May. Expect a world-class selection of his work since the Pompidou Centre in Paris houses many of his most famous pieces. Later in the year Daniel Buren will return to the museum to design another installation. Expect something colourful on the lines of his multi-coloured windows on the Pompidou cube.

As usual, this contemporary art museum in Malaga will offer a selection of the very best and latest in cutting-edge art. The American artist Lawrence Weiner returns to the CAC in January after 9 years of absence. His ‘There are things that move outside of motion’ exhibition (installation and videos) looks promising.

A pedestrian bridge joining the city to the Guadalhorce Natural Park. The budget and work for this long-awaited connection have been approved and the wooden bridge should be ready sometime during the year.

The bridge will make it much easier for pedestrians and cyclists to visit this unusual corner of Malaga, a haven of peace and bird-watching paradise. We can’t wait for this.

Political differences mean that 2017 will come and go without any new stretches of the Malaga Metro opening. The most optimistic estimates point to late 2018 as a possible date for the line between El Perchel and El Corte Inglés department store. 2019 looks likely for the extension to the centre. Meanwhile, the disruption to pedestrians on the Alameda Principal will continue, but for those of us who are regular users of the Metro it will be worth it!