You are here: Home / Things to do / Day Trips / Guide to Caminito del Rey

The Caminito del Rey, a walkway along the Guadalhorce River gorge, reopened at Easter 2016. Touted as one of the world’s most dangerous walks, it has quickly become one of the biggest attractions in Malaga. It’s also 1 of the 5 best half-day trips from Malaga, but does it live up to the media hype? 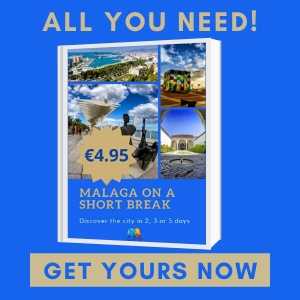 Countless blog posts (including some very good ones) have been written about the walk. There’s even a Google street view walk. But practical information on the Caminito del Rey is a bit thin on the ground so in this post we provide answers to what we think are the most common questions.

Questions about getting to and from the Caminito del Rey

How do I get there?

From Malaga take the A-357 to Ardales. Once you pass the village (on your left), turn right and follow signposts to ‘Los Embalses’. This winding road takes you to the lakes/ reservoirs. Park near the restaurants and walk to a tunnel with a green sign ‘Caminito del Rey 1.5km’. Go through the tunnel and follow the track round until you reach the start of the walk.

Top tip – take a torch or use a mobile torch app for the tunnel. It’s long and pitch black!

How do I get there on public transport?

Not easily but it isn’t impossible. Take the train from Malaga to El Chorro and then walk north to Caminito del Rey. Take the bus here to the other end of the walk. Timetable and prices of trains here (see page 2 for Malaga). Note that there’s only 1 train a day in each direction.

The Spanish railway company Renfe offersa ticket combining Caminito del Rey entry, the return train journey and the bus between the train station and the start of the walk. You buy the ticket (Caminito del Rey: Combined Ticket) at any Cercanías train station from the ticket machine or office between 6am and 9.15am on the day you wish to walk the walk. You need to buy at the Cercanías station at Maria Zambrano station in Malaga in time to catch the 10.05am train to El Chorro. When you arrive at El Chorro you catch the 11am bus to the Caminito entrance. At the end of the walk, you return to El Chorro station to catch the 6.03pm train back to Malaga. The cost is €23 or €31 if you choose the guided tour. 100 tickets are available every day and you can only buy a ticket on the day of travel.

How do I get from one end to another?

Shuttle buses link the two ends of the walk. They run roughly every 30 to 50 minutes on a first-come-first-served basis so you may not get on the first bus that comes along. The journey costs €1.55 and takes about 15 minutes. You can buy a ticket for the walk with the bus trip already included – we think this is a great idea.

Top tip – bus drivers don’t give change for anything bigger than a €5 note so make sure you’ve got some small change for the fare.

Questions about the Caminito del Rey walkway itself

Compared to the original walkway, not at all! But there is a degree of danger because after all, the walk runs 100m above the gorge. That said, we felt very safe throughout the walk. A steel mesh fence runs along the entire walkway and there’s along a steel cable on the cliff side to hold on to if you wish. Cameras, alarm posts and attendants are placed along the walk so help at hand if needed. You’re also equipped with a hard hat.

Top tip – if you’re hoping to look good in your Caminito del Rey photos, make sure your hard hat is on straight (our older daughter’s hat is lop-sided in all ours!).

Can you look down?

If you have any sort of fear of heights (see question below), then don’t look down because when you walk through the gorge the drop down is sheer and long. Do look up and ahead because the scenery is magnificent.

What about if you’re afraid of heights?

2 people in our party have issues with heights but they both managed the walk more or less easily. They said they felt safe throughout and even managed to look down a couple of times. The suspension bridge at the end was a real challenge for them (the high winds didn’t help) but they made it. However, this isn’t a walk if you suffer from vertigo.

Is it suitable for children?

Children under 8 are not allowed to go on the walk. For over 8s, we think it’s a great experience.

How long does it take?

The total length is nearly 8km so you can in theory finish it in less than 2 hours. However, this is a walk to be savoured – the scenery and engineering are amazing – so you’ll probably take longer. We took 3 and a half hours, which included stopping for photos and to read the information panels on the way.

Is it a hard walk?

No, but it isn’t a stroll either. It’s practically all flat except for some steep steps at the end.

What about food and drink?

There’s nothing en route so take your own. The middle section (non-walkway) has some nice spots for a picnic if you’re making a day of it. There are several restaurants at both ends for lunch.

What sort of clothing should I wear?

Sturdy footwear such as trainers or walking boots. The regulations say that visitors in flipflops or high heels won’t be allowed on the walkway. If you’re visiting in the summer, take a hat to protect yourself from the sun and in the winter, take some warm layers – the wind blows very cold down the gorge!

Are there toilets on the way?

No, but there are toilets at the start and finish.

How to get Caminito del Rey tickets

How do I book?

1 of the biggest challenges for this walk can be getting tickets! They can only be booked via the website and once they’re released, they go very quickly, although availability has improved a lot over the last few months. Check the website regularly for new booking windows or contact the tourist offices in Álora or Ardales to see if they have tickets.

What do I need to book?

To book you need to provide your full name and the number on your identification document (passport or national ID card). You must show this document when you arrive to start the walk.

What does it cost?

As from April 2016, the Caminito del Rey costs €10. We think this is good value for one of the prime attractions in Malaga and well worth the price of a ticket. When you book online you have the option to buy the bus ticket (€1.55) at the same time. Handy if you’re planning to get the bus from one end to the other.

Do I have to book far in advance?

As one of the most popular things to do in Malaga, tickets get sold out quickly. The website offers limited availability too so it pays to plan ahead and book in time to be sure of a visit.

Last-minute availability: If you can’t get tickets before you come to Malaga, check the website while you’re here – last-minute tickets are often available for the next day.

Can we do a guided tour?

Some tour companies offer guided tours of Caminito del Rey and you can also book them via the website. They take place in English on weekdays at 10am and 1pm, and on weekends at 10am, 1pm and 3pm. They cost €18 (€19.55 with bus ticket included). We haven’t been on a guided tour ourselves but we know several people who have and they highly recommend them. You get a unique insight into the history of the Caminito and its geology and fauna.

Questions about the history of Caminito del Rey

What is the origin of the walkway?

The Gaitanes Gorge (Desfiladero de los Gaitanes in Spanish) carved by the Guadalhorce River – just 10 metres wide at some points and 700 metres high – is an essential part of communications and the water and electricity supplies in Malaga. In 1866, the railway line connecting Cordoba and Malaga via the gorge was completed and a hydroelectric station at El Chorro was built shortly afterwards. At the beginning of the 1900s, a walkway was installed along the gorge so that local people could easily get from one end to the other.

Why’s it called the King’s walkway?

It’s named after King Alfonso XIII who walked along it in 1921 when he placed the last stone on the reservoir dam. A white stone seat and plaque commemorate the occasion – see this on the right as you cross the road over the reservoir.

Why was it closed?

When you walk the Caminito del Rey, the answer’s obvious – the old path became extremely dangerous from rain erosion and lack of repair. So dangerous in fact that several climbers were killing while attempting to walk it. The walkway was closed in 1990.

When did it open again?

In March 2015 the walkway was finally opened to the public again. It took several years of ambitious engineering – some stretches of the walkway had to be put in place by helicopter – and 2.24 million euros to restore the Caminito del Rey to its former glory.

Questions about the area

The Caminito del Rey is in one of the most dramatic parts of Malaga province where there’s plenty to do besides walk the walk:

Visit the lakes – combine your walk with a day out at the lakes. Relax on the beaches and take a turn on the water in a kayak or pedalo. Read about a Day at the Lakes.

Discover Ardales – a pretty little village with some great caves (get tickets for a guided tour at the museum) and lovely tapas bars.

Explore Bobastro – a medieval Christian Basilica built a rebel Moor in the middle of nowhere. Read all about it here.

And finally does Caminito del Rey live up to the media hype?

Caminito del Rey probably isn’t the world’s most dangerous walk but it definitely counts as one of the most spectacular. And being 100m up on a wooden walkway does come with a certain adrenaline rush. It makes a great day out and we certainly recommend it as a must-do activity for anyone on holiday in Malaga.

The timeline for these new developments hasn’t been confirmed but once approval arrives from the regional authorities, work will start and take around a year. Expect these additions in early 2020.