You are here: Home / Things to do / Day Trips / A day at the lakes in Malaga

A day at the lakes in Malaga

If you’re looking for a different take on your holiday in Malaga why not head for new waters? Take a day out at the lakes in Malaga and mix some fun water sports with stunning countryside and if you have time, a walk along Caminito del Rey. Read our guide to the lakes in Malaga.

An introduction to the lakes in Malaga

Although everyone refers to them as lakes they’re actually reservoirs. The 3 giant reservoirs – known as the Conde del Guadalhorce reservoirs – are located about 30km north of the city in the Guadalhorce River valley. As well as supplying Malaga city with drinking water they provide a great recreational space for water sports in the summer and fishing and walking all year-round. The lakes in Malaga are a favourite spot for camping and their calm turquoise waters make a change from the Mediterranean.

Did you know? The water from the lakes in Malaga has to pass through a desalination plant before it’s drinkable because 1 of the reservoirs is fed by a salt-water spring. Despite the best efforts from engineers, no one has been able to block off the spring.

History of the lakes in Malaga 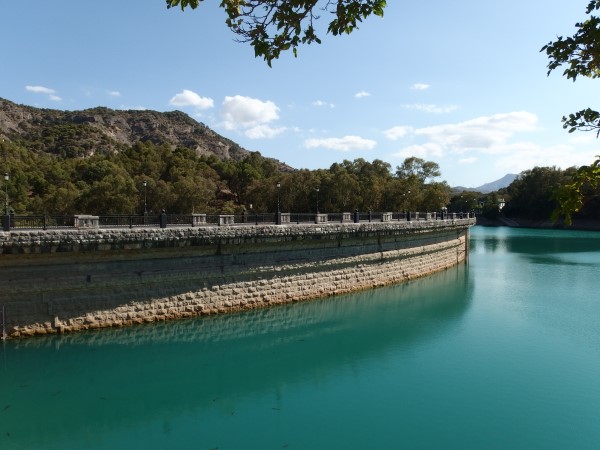 Along with the Caminito del Rey (King’s walkway), the reservoirs are one of the greatest feats of Spanish engineering in the early 20th century. You only have to look at the size of their dams to see the challenge facing those engineers. READ ALL ABOUT CAMINITO DEL REY They were finished in 1921 when they were officially opened by King Alfonso XIII – a stone seat on the walkway over the dam commemorates the place where he sat and signed the papers. During his visit, he also walked along the narrow pathway built along the nearby river gorge and now one of the most exciting things to do in Malaga.

Watch our video of the lakes in Malaga. And yes, it’s always windy!

A drive across the dams – if you go to the lakes in the car, drive as far as you can along the reservoirs and over the dams. This drive gives you a good idea of their size and some of the best views. Lunch with lakeside views – there are a couple of good lakeside restaurants and both have lovely views over the water. These are popular spots to get there early (1.30pm for lunch) to be sure of a table. Caminito del Rey – before the extensive repair work and major refurb, the King’s Walkway was definitely one of the most dangerous walkways in the world. It’s much tamer now but you still get an adrenaline rush as you walk along and look down and up at the river gorge. It’s become 1 of the biggest attractions in Malaga and you need to book tickets in advance. Read our FAQs here.

Top tip – if you can’t book your walk along the Caminito del Rey in advance, keep an eye on the website while you’re on holiday in Malaga for last-minute cancellations on tickets.

Messing about in the water – there are several water sports concessions around the lakes where you can hire pedalos, kayaks and canoes. You can also go swimming but keep within the designated areas (there are dangerous undercurrents in some parts of the reservoirs) and wear protective footwear (it’s stony and slimy underfoot!). 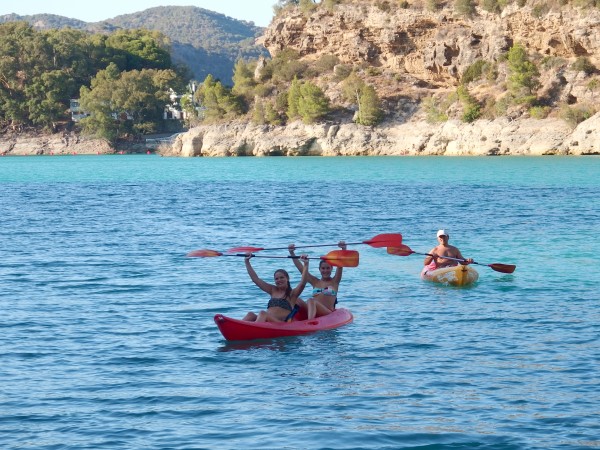 Getting to the lakes in Malaga

There’s no public transport to this area of Malaga so the only way to get to the lakes is by car. Hire a car in Malaga and take the A-357 road out of Malaga (dual carriageway for the first sections). After about 35km you reach the village of Ardales. As you pass the village look for a right-turn signposted ‘Ardales El Chorro’ and then follow the signs to ‘El Chorro Embalses’. The journey takes about 50 minutes.

A day out at the lakes in Malaga is one of the great things to do in Malaga. Check out our website for details on lots (and lots) of others. And while you’re there, pick a place to stay and where to eat – all venues are tried and tested!