You are here: Home / Events / Christmas / Our pictures of Malaga at Christmas

Our pictures of Malaga at Christmas

Malaga at Christmas is one of the loveliest times to visit the city. For those who aren’t on holiday in Malaga over the festive period, here’s our selection of the best Christmas pictures.

Probably one of the biggest attractions in Malaga at Christmas are the lights. Calle Larios takes the lion’s share of the biggest and brightest, but there are lots of other lights round town too. 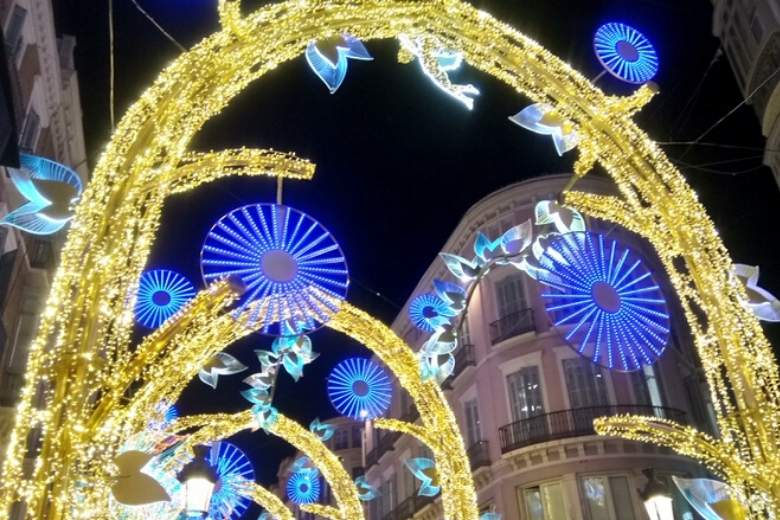 Calle Larios is transformed every year into a twinkling mass of lights making a roof for the entire street, also covered in long lines of fairy lights. The lights on Larios are so bright you can see the glow from Muelle Uno!

Calle Larios has a light and sound show, although this year, the times aren’t advertised to avoid large crowds gathering. However, the music is often on so if you’re in the area, you’ll probably catch the show. For what to expect, check out the video above to see (and hear) from yourself. (Beware Christmas earworms – Mariah Carey’s All I want for Christmas is one of the main tunes this year…)

At the top end of Calle Larios, Plaza de la Constitución has a giant lit-up tree that you can walk through plus several decorations in the square itself.

The orange trees on Plaza de la Constitución have got their fairy lights on this year too. 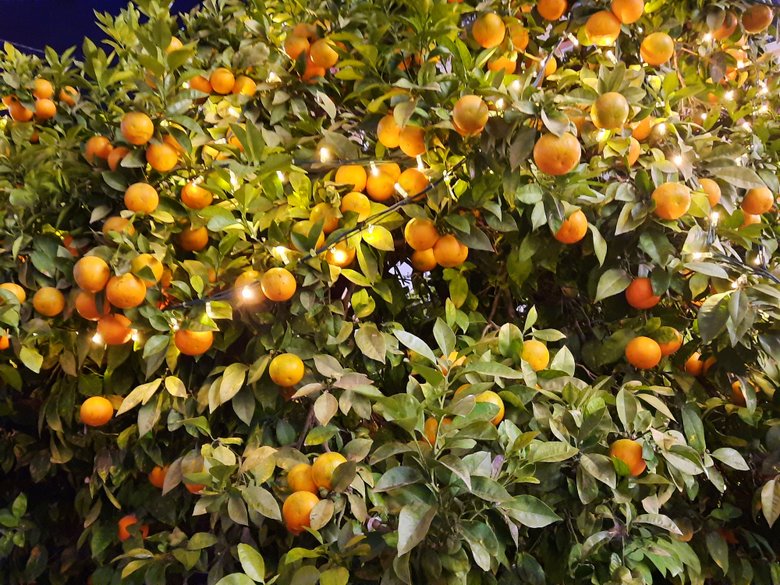 Check out the view from Calle Compañía of the Christmas tree, lights and Cathedral. 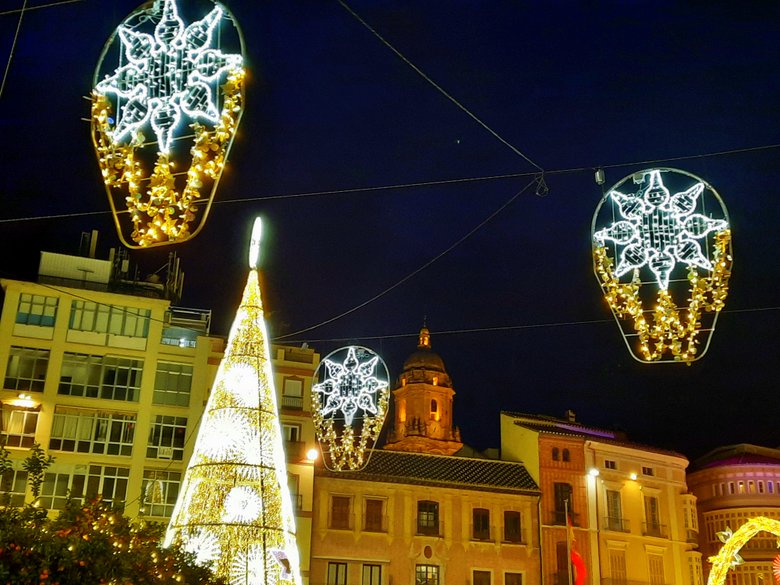 There’s also a pretty tree on Plaza de la Marina, sparkling in silver and gold at night and we love the lollipop lights along Paseo del Parque. Not quite the same as nearby Calle Larios but pretty and very festive! 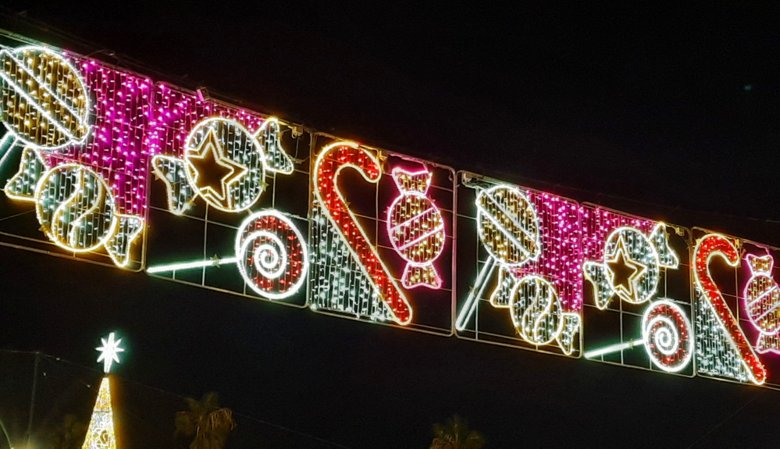 A few unusual Christmas trees have appeared around Malaga – one at the entrance to the Contemporary Art Centre (CAC), one in front of the Cervantes Theatre and another outside the Russian Museum. Plus 4 in the Alameda Principal. The colours are loud and not at all traditional but these trees certainly make a statement. 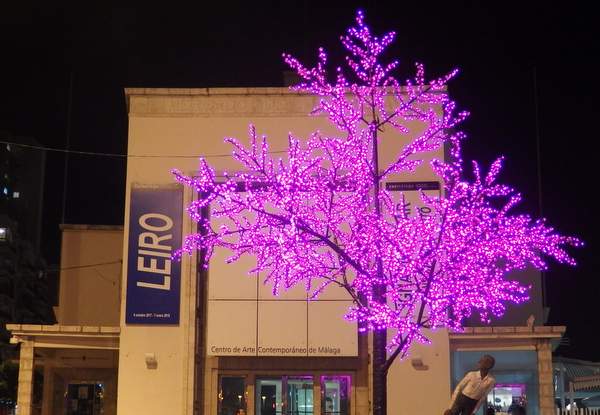 Calle San Juan takes centre stage this year and has our favourite lights. The end nearest Calle Espereceria has large globe lights strung across the street while the other end has got some stunning chandeliers. 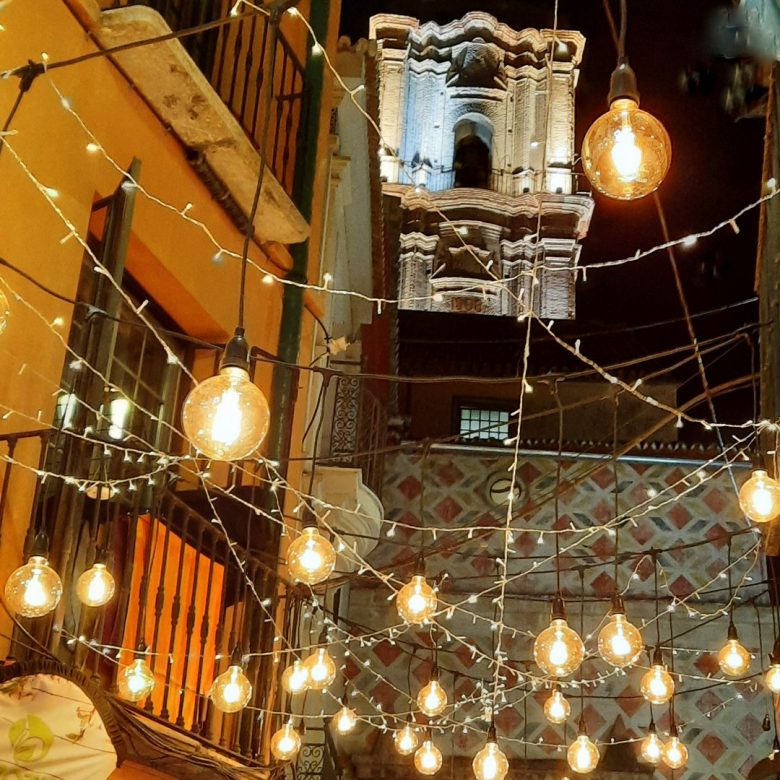 There are also lovely lights along the Paseo del Parque and the Alameda has come into its own yet again this year. After the recent pedestrianisation, this central street returns to the centre stage. There are several multi-coloured trees on both sides plus central lights.

Several spots in Malaga has decorations that look just as good in the day. We love the chandeliers on Calle San Juan, for example. 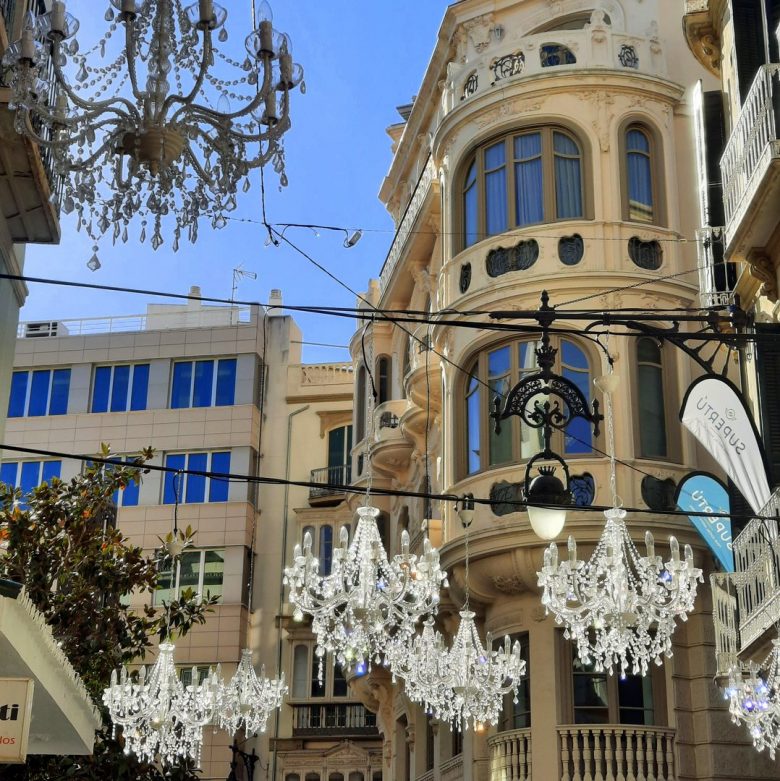 Nativity scenes in Malaga at Christmas

An essential part and parcel of any Christmas in Spain are nativity scenes. There are nearly 60 on display in Malaga until 6 January. We’re gradually making our way round them and here are our highlights so far.

The giant nativity that usually sits at the feet of the Marquis of Larios statue is at the entrance to the Cathedral this year.

Inside the Cathedral is one of the biggest nativity scenes in Malaga. The attention to detail is amazing so you need to take your time as you wander round the display.

The nativity scene on show in the Carmen Thyssen Museum is much smaller, but just as lovely. 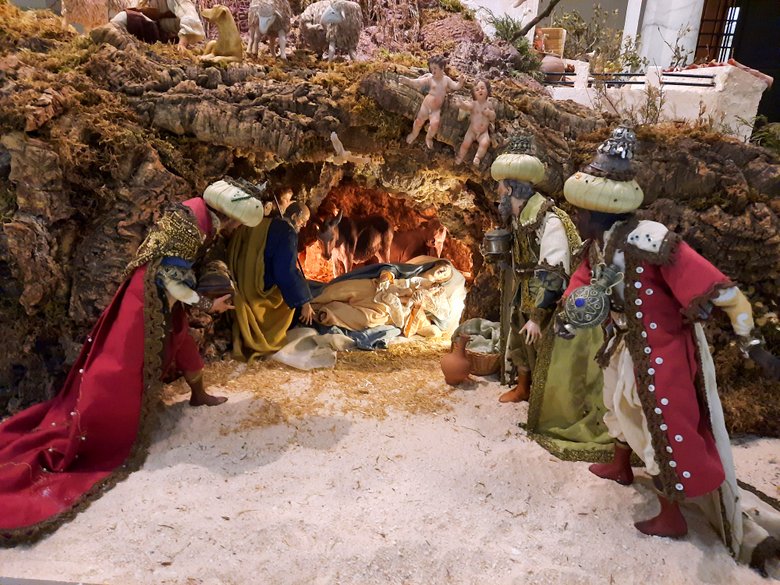 The Estudiantes brotherhood (on Calle Alcazabilla) also have a pretty impressive nativity scene on display. The figures are much bigger than those in the Cathedral, but again, it’s the detail that’s amazing. You also get a close-up look at their Easter Week float (imagine carrying that round for hours on end).

And that leads us nicely to the next essential element of Malaga at Christmas. Red is probably the most traditional Christmas colour so it’s no surprise to find the streets, squares and parks in Malaga planted with poinsettias. Get your own at one of the florist stalls along the Alameda Principal and then admire them everywhere in the city.

And finally, here’s a video showcasing our favourite pictures of Malaga at Christmas in 2018.
If you haven’t been able to make it to Malaga this Christmas, make it a date for next year. We look forward to seeing you. Meanwhile, Happy Christmas!