An essential part of Christmas in Malaga is the Three Kings Parade. It takes place in the late afternoon and evening of the 5 January and is one of the most magical nights of the year for children and adults alike. It’s also a fitting end to the festive season and comes with an extra bonus – the next day is a public holiday! Read on for all the information about the Three Kings parade in Malaga.

Father Christmas (Santa Claus) has gradually been making a name for himself in Spain over the last 20 years or so. But the traditional and best-loved present bearers for Spanish children are the Three Kings.

Gaspar, Balthasar and Melchior, whose names form an essential part of any Spanish childhood, visit every house on the camels and leave presents on the night of 5 January. Children leave out their shoes in anticipation as well as turron and Christmas sweetmeats for the Kings plus sugar lumps for the camels.

In preparation for their arrival, every village, town and city in Spain celebrates a parade and Malaga is no exception.

It’s one of the biggest events in Malaga of the year and the city centre is packed with families all anxious to catch a glimpse of the Three Kings. The parade takes the form of a cavalcade with highly-decorated floats and performers accompanying them. Each King rides a separate float sitting on a high throne and surrounded by his courtiers.

The Three Kings Parade in Malaga has around 14 floats that include the 3 Royal. The others take cartoon or traditional themes and there’s lots of music including Spanish Christmas carols.

As well as the excitement of seeing the Kings, children (and their parents) are there for the sweets. All participants in the parade shower the spectators with hard-boiled sweets (the gluten-free sweets come in a light-blue wrapper) and thousands of them. Every year, some 12,000 kilos (4 million sweets) are up for grabs so everyone goes home with a good supply.

The Three Kings Parade in Malaga starts with their majesties’ arrival at around 5pm. The starting point varies depending on the year. In 2023, the Kings spend the night at the Alcazaba Fortress (once a royal residence) and go from here to City Hall. They then join the parade as it makes its way around the city. Start time is 6pm from City Hall. 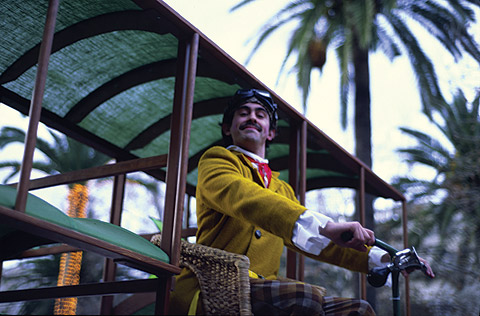 Keep up with things in Malaga with the Guide to Malaga free newsletter, published every other Friday.

Top tips for the parade

Or walk into Malaga city centre. There’s no point trying to drive in as the city is gridlocked and all car parks full. If you’re coming to Malaga from the west end of the Costa del Sol, park in the large car parks near the Martín Carpena sports stadium and take the metro from here. Get off at El Perchel station and walk into the centre (15 minutes). You can also get the number 7 bus from the sports stadium, but progress will be slow because of the traffic.

If you’re coming to Malaga from the east, park where you can in El Palo or El Candado and get the number 3 or 11 bus as far as La Malagueta.

SEE MORE ABOUT GETTING AROUND MALAGA

This is one of the busiest events in Malaga and the streets are packed. Keep a very close eye on your children at all times in case they slip away and keep them well back from the Parade itself. Barriers run the length of the itinerary but even so, make sure your children don’t climb or slip under them.

Before you arrive, choose your spot and then get there early especially if you want a frontline view of the parade. We recommend bagging your place at least an hour before the parade is due to pass, even earlier if you’re really keen.

If you’re planning to have dinner in Malaga, book your table well in advance. Or go for a meal at a venue outside the Parade itinerary – the Soho district, Muelle Uno and restaurants on the western seafront are all good options that should be quieter.

If the Three Kings Parade isn’t your thing, keep away from the city centre. How about visiting the Russian Museum and/or the Car Museum? Or taking an evening stroll on the seafront or Muelle Uno. It is, however, a lovely event – there’s something very special about all the families on the streets and all the children with literally stars in their eyes. A truly magical event!

Although 5 January isn’t a public holiday, many shops, business and museums close early (usually at 5pm). Monday 6 January is a public holiday when shops and businesses are closed. Bars and restaurants open as usual.

There are lots of traditions that go with the Three Kings and one of the most delicious is the roscón. This circular cake is made of sweet dough and comes covered in sugar and candied fruits. You can buy it filled with cream, confectioners custard, chocolate… You eat it on the morning of 6 January with hot chocolate for breakfast.

The roscón comes topped with a golden crown for the person who gets the prize inside. Don’t hold your breath for exciting prizes – they’re usually plastic ornaments but you do get to wear the crown and be king for the day. The cake also has a broad bean inside it – get this in your slice and you pay for the cake.