You are here: Home / Events / News / Guide to Malaga on Informe Semanal

Guide to Malaga on Informe Semanal

At Guide to Malaga, we started 2021 on the television. This time, it was Spanish national television, TVE and on their flagship current affairs programme, Informe Semanal. We formed part of the feature on Brexit and its effects on British residents and tourism on the Costa del Sol. As usual, it was a fun experience. Plus it gave us the chance to share the screen with some very interesting people and showcase our favourite part of Malaga.

Brexit and Malaga on Informe Semanal

Ángela Rodicio, the journalist in charge of international current affairs (and one of Spain’s top journalists) contacted Guide to Malaga before Christmas to ask us to organise a round table in Malaga. The topic for Informe Semanal? No surprises there and Brexit it was.

We got in touch with Jose Maria Sánchez from Andalusian Lawyers to give a legal point of view; Rachel Haynes, editor of Sur in English to talk about how the newspaper has informed on Brexit over the last 4 years; and Chris Dove, a local British journalist to offer her personal experience. Joanna at Guide to Malaga would contribute to thoughts about tourism.

Jose Maria Sánchez talked about the nervousness among his British clients regarding Brexit. He said that he’d received many requests for information, particularly about how the new rules would affect property rights. (The answer is that there are no changes.)

Rachel Haynes spoke about the coverage given to Brexit in Sur in English whose readership includes a substantial part of the expat population in Malaga. Chris Dove added her personal experience – she lives in Spain with her German partner in what she considers a truly European household. She expressed her sadness at Brexit.

For Guide to Malaga, Joanna said she believes that the UK and Spain need to abolish the 90-day stay rule, now in place for UK nationals in the EU. We know that many of our followers own second homes on the Costa del Sol and/or like to spend long periods in the sunshine. Being unable to do this will of course affect tourism in Malaga. We believe a bilateral agreement is an easy answer.

Everyone at the table agreed that attracting digital nomads is a great way forward for Malaga tourism. Ángela said she was struck by the lifestyle in Malaga and how easy it would be to work from home in the city.

READ ABOUT DOING BUSINESS IN MALAGA

Sitting on a sunny terrace on Muelle Uno was again the perfect place to be on television in Malaga. With the fabulous backdrop and sparkling Mediterranean, the city looks at its best from this viewpoint.

The weather performed too. It was nippy to start with – a cold north wind (that famous terral) had been blowing for days – but it was soon warm enough for coats off.

As fellow journalists, Rachel, Chris and I loved chatting to Ángela. She’s a seasoned correspondent for TVE and has covered major international events. She was in Sarajevo during the Balkan conflict and had some great anecdotes regarding the war and BBC correspondent Martin Bell.

She also had an interesting story about Brexit and Farage and covered one of his open-top bus trips around the UK. And even had the opportunity to perhaps change the course of history… 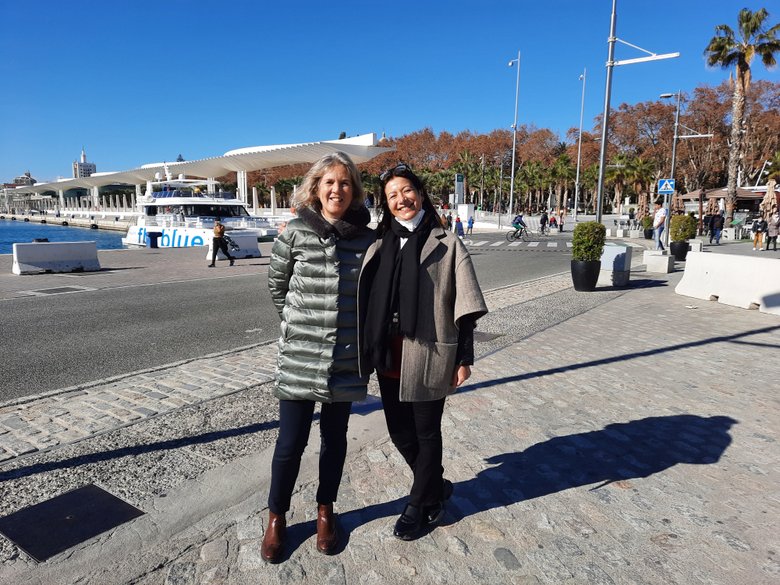 It’s been a couple of years since we were on BBC News in Muelle Uno and we’d forgotten how long filming takes. The crew wanted to include Joanna and Jose Maria arriving on their bikes. This very short sequence took no less than 10 takes!

But all the testing, multiple takes and microphone probing was more than worth it. If only to get to showcase Malaga on prime time television!