At long last, the outstanding Malaga art museum, Contemporary Art Centre (CAC) has reopened. The museum has just welcomed visitors back after several months and is currently showcasing work by the Irish artist, Sean Scully.

Eleuthera runs until 19 January 2020 and includes a series of works in oil, pastel and drawings as well as photographs. Scully created the pictures between 2015 and 2018, and the collection represents his return to figuration after decades of abstraction.

CAC is known for its cutting-edge modern art and always exhibits work from those at the top of their game. Scully is no exception and his Eleuthera collection takes pride of place in the largest exhibition space at the museum.

Eleuthera is the fourth most populated island in the Bahamas and home to miles of those quintessential white sands and turquoise seas. It’s no surprise then to find that sand and sea take centre stage in Scully’s exhibition. The Irish artist has based all the works on his son Oisín playing on the sand while on holiday in Eleuthera.

The first thing that strikes about the latest exhibition at this Malaga art museum is the range of colours. Bright reds, blues and green dominate the canvas with rosy pinks, oranges and yellows also on the palette. Vibrant stripes appear in every work, either as Oisín’s hair, the water or marks in the sand.

Scully says his most important point of reference for Eleuthera is the French artist, Matisse. Both use colours as they see them rather than as they are in real life. Scully’s works include blue or coral sand, red or green water… 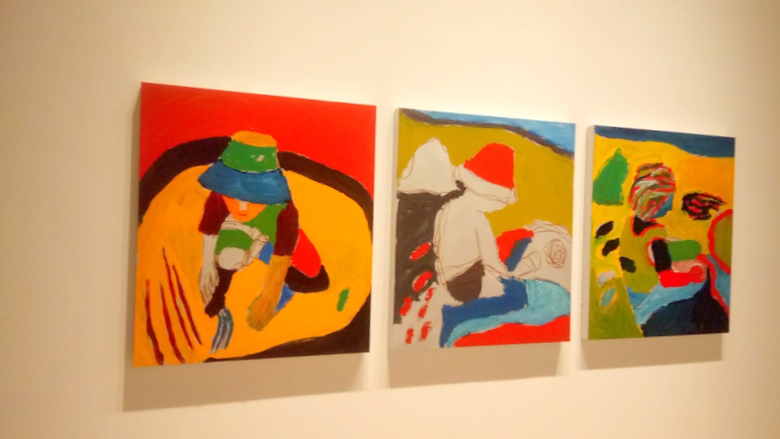 Practically all the works by Scully in Eleuthera include part of a circle around the boy. “My son plays on the beach. He makes a circle around him, as if he understands that symbolically he must also make his place and protect his home,” says Scully. “Thrilled to be the guardians of his castle. This is paint in the colours of the mind.”

You can see the circles in the sand in the set of photographs of Oisín on the beach in the Bahamas. They’re placed at the end of the exhibition and reveal the intimacy of a boy playing on the beach. Scully and his wife also appear in some of the photos, adding a striking family touch to the next exhibition at CAC Malaga.

Sean Scully was born in Dublin in 1945 and has been creating art since the early 1970s. Now based in the US, he’s one of the leading abstract artists in the world. Throughout his career, he has received numerous accolades including the Guggenheim Fellowship and the National Endowment for the Arts Fellowship. In 2014, the National University of Ireland’s Burren College of Art awarded him a honorary doctorate. In 2019, the BBC made a documentary on Scully’s life and work. You can read more about Scully here.

Eleuthera runs at CAC Malaga until 19 January 2020. This Malaga art museum is open Tuesday to Sunday 10am to 8pm. Entrance is free.