If you’re like us and one of your favourite things about Malaga are the pedestrian spaces, you’re going to love the new look for the Alameda Principal. Although it isn’t quite complete, the work finished so far has added 23,000 more square metres to pedestrian areas in the city. And best of all, it looks great.

Take a stroll from the end nearest the river and see for yourself what has changed. Pedestrian areas now take up both sides of the Alameda with traffic confined to 3 lanes in the middle. A huge difference from the previous 8 lanes and 60,000 vehicles a day.

Next you’ll see the children’s play area just next to the Alameda de Colon and then the vast expanse of cream paving that runs all the way to Plaza de la Marina, interrupted by the traffic only on Calle Cordoba. Notice the new florists kiosks, returned at last to their central location on the Alameda Principal Malaga. Apparently, not everyone’s in love with their new look, but we much prefer the way the stalls look now.

And while you’ll there, take in the pergola for shade near Plaza de la Marina although the huge ficus trees provide plenty of their own. A line of palms and orange trees divides the southern side – the scent here will be heavenly in spring when they come into bloom – and you’ll notice some designer strips of grass. (Not sure how these will survive under the hot Malaga sun and lots of footprints but they do look good.) 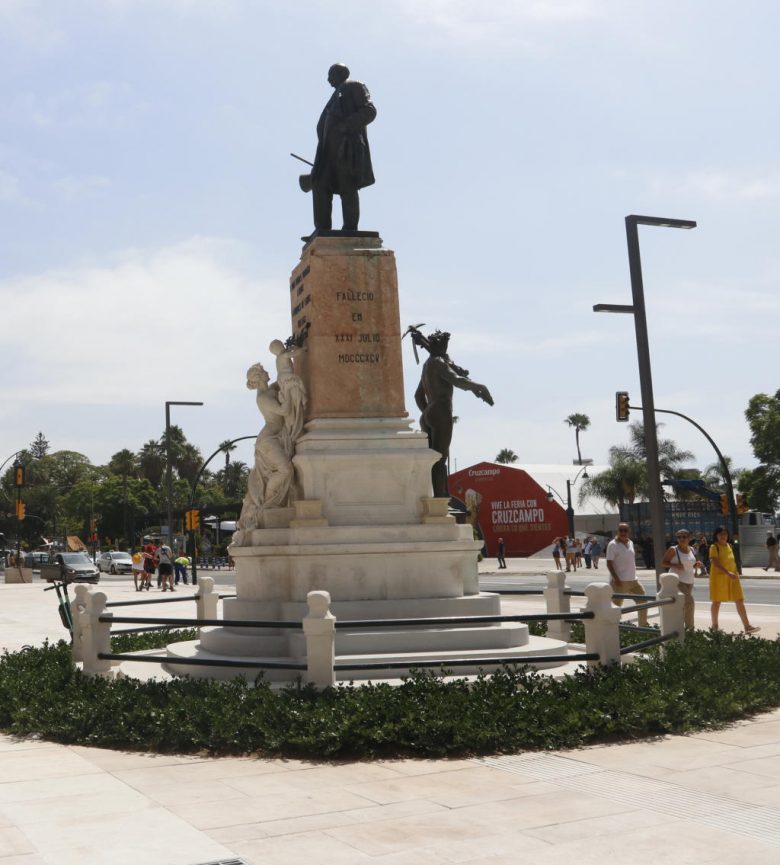 And then the show piece – the restored statue of the Marquis of Larios. He now takes pride of place at the entrance to Calle Larios with the best view of the best street for shopping in Malaga. He also seems more integrated into the city now too and you can get right up to the statue to admire it.

It’s has been a long time coming. At the last count, the Alameda Principal Malaga and the area outside the Corte Ingles department store has been dug up for four years. But the recent introduction of 24/7 work has meant things have really moved along.

See for yourself the amazing results in the video below.

Work didn’t quite get finished for Malaga Fair, but the work on the Alameda Principal should be complete by Christmas, in time for another of the biggest events in Malaga. This means the area will mostly be pedestrian with buses and taxis taking up 1 lane going east and public transport and private cars in 2 lanes going west in the centre of the Alameda.

And as for the metro, no official sources are prepared to offer a definitive date. Take a look at the excavation work and you can see that although it has progressed there’s still a lot to do. Hopefully the Atarazanas Station will open at the end of 2020, but until then at least the work will be underground and we can all enjoy the Alameda Principal Malaga again.