Regular visitors to Malaga will have noticed the large building near the top of Calle Granada and opposite the Iglesia de Santiago church. It has sat in ruins, shored up by huge scaffolding for years. Until now. This week, Palacio Solecio has opened its doors as the newest boutique hotel in Malaga.

Make your way up Calle Granada now and you’ll discover a huge painted façade with an elegant entrance. Step inside and you’ll walk into a world of 18th century Malaga. The building has been completely restored, from top to bottom and is now a 4-star boutique hotel with 68 rooms.

Palacio Solecio, named after its first owner Felix Solecio, is mostly about size and elegance. It’s one enormous palace taking up a long stretch of Calle Granada and going back well into Calle Beatas. The marble entrance arch takes you into the hall where a giant staircase beckons. Just the first few stairs remain in the original stone but the rest look just as authentic. All are flanked by elegant marble sculptures and covered in carpet in the hotel’s signature colours: ruby red, green, blue and gold.

Turn left into the patio, complete with columns and three floors. This is a very typical feature of palaces in Malaga and like the patio in the Carmen Thyssen Museum, the one at Palacio Solecio also has a glass roof. On the walls are motifs reminiscent of the Alhambra in Granada in a nod to Malaga’s Moorish past. There are also several Cordobanes, highly-decorated and embossed leather pictures, typical of Al Andalus in the 11th and 12th centuries.

Palacio Solecio has 68 rooms, all decorated in a similar style and taking one of the signature colours. We visited one of the Deluxe Palacio rooms, a rather special example as it turns out. As soon as you enter the first-floor room, you’re drawn to the balcony with spectacular views of the Iglesia de Santiago opposite. This is the one to book to see the processions at Holy Week in Malaga. 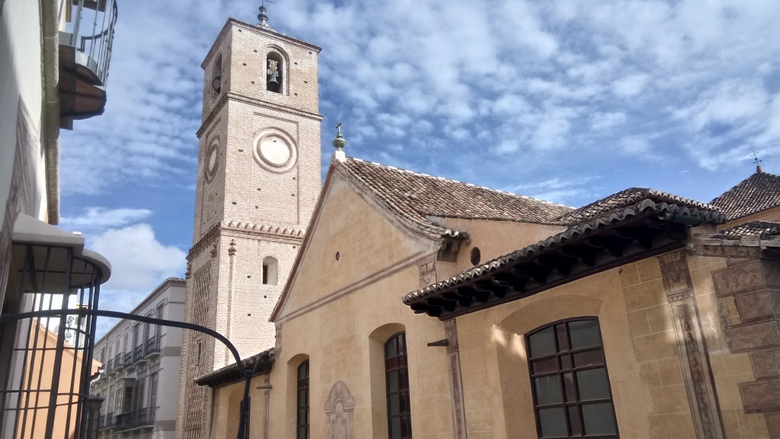 All rooms come spacious with real attention to detail. Hand-crafted oak doorways, super-soft linens, stand-alone bathtubs as well as showers, comfy seats… And the décor continues the hotel’s 18th century theme, but with a modern touch.

Malaga only has one Michelin-star restaurant, run by José Carlos García on Muelle Uno and his cuisine is also on the menu at the latest boutique hotel in Malaga. Balausta Restaurant, located in the patio, serves local dishes, all of which get a modern update. The menu changes often depending on the season but expect to find fish and seafood such as conchas finas (clams) from Malaga as staples.

García told Guide to Malaga that he wanted to open a restaurant in the “new heart of Malaga” in the hotel so many Malagueños have been waiting for. He mentioned his commitment to Malaga – “we opened in Muelle Uno to show our support for that new area of Malaga,” he said. “Now it’s time to move into the centre.”

He plans to make Balausta “a focal foodie point in the city” and offers main dishes and sharing plates in the bid to make it a venue for everyone. The restaurant opens daily for lunch and dinner.

SEE WHERE ELSE TO EAT IN MALAGA

The history of Palacio Solecio

The backstory to a historic building is always interesting and Palacio Solecio certainly has one to tell. It was originally known as the Palacio del Marqués de la Sonora and built in 1789 as a home for Felix Solecio. The architect behind the design was Jose Maria de Aldehuela, who also created the spectacular bridge over the river gorge in Ronda.

Solecio arrived from Italy in Malaga to set up a playing cards factory in Macharaviaya, a small village in the Axarquía in the Malaga mountains. His business ventures also included some paper mills in Arroyo de la Miel in Benalamadena to produce the materials to make the cards. Palacio Solecio was both his home and a warehouse for all the paper. Perhaps that explains the size of the rooms in the building.

The company Marugal are behind the development and management of the latest addition to the Malaga hotel scene. They also run hotels such as Tótem in Madrid and Cap Rocat in Mallorca and are known for providing exceptional customer service.

SEE WHERE ELSE TO STAY IN MALAGA