Thinking of planning a short break in Malaga? Then our ebook is just what you need. Click below to buy – 25% discount with code WEB.

Monday 16 August is a public holiday in Malaga (and in Spain). Most shops, bars and restaurants will be open as usual, but not businesses. (15 August is the official date, but because it’s a Sunday the holiday has been moved to the Monday). Thursday 19 August is also a public holiday, but just in Malaga city and shops and businesses will be closed.

For more information about public holidays in Malaga click here.

August means fair time in Malaga, but obviously with covid-19, it just isn’t happening this year either. The 10-day event has been cancelled and we’ll have to wait until August 2022 to celebrate in style again. If you’d like information about what usually goes on, check-out our dedicated guide to Malaga Fair.

Bienal Sur comes to Malaga for the ‘To the South of the South’ exhibition at La Térmica Cultural Centre, designated km 9692 for the event. There are several talks and conferences celebrating the Bienal as well as an exhibition, ‘Dissident Maps & Zoo’. On show are works by 4 South American artists that question the way we look at and interpret maps, archives and graphic documents. See it until 1 November. Open Tuesday to Friday 3 to 8.30pm and weekends 11am to 2pm and 5 to 8.30pm. Free entry.

Find out more about Bienal Sur.

Some sporting events take place throughout August for both participants and spectators. Full information on dates, times and how to sign up is available here (in Spanish only).

It’s too late to sign up but you’re just in time to watch the swimmers and cheer them on as they swim the annual 1km race in Malaga Port. The first jump in the water at 11am on Sunday 1 August from Muelle 2 (underneath the Pergola). There are 150 competitors in the timed race – 5 start every minute.

Sabor a Malaga are organising a 4-day foodie extravaganza from 19 to 22 August when the full range of Malaga produce will take centre stage: olive oil, cold cuts, cheese, wine, fruit and vegetables, conserves, chocolate … See the stalls and related events on Plaza de la Marina and the Paseo del Parque from noon to late. The stage on Plaza de la Marina will host events over the four days with the focus on flamenco and wine.

Can’t come to Malaga in August and missing the food?

Why not create great Malaga food in your own kitchen? Our foodie ebook, Malaga Fine Wining & Dining, includes 11 exclusive recipes served in Malaga’s best restaurants, 2 with Michelin stars. Easy to create and make plus a chef’s top tip for each one and a Malaga wine pairing suggestion. Our cookbook has received the thumbs-up from some real foodies too – see their reviews here. All for just €8.95 but add the discount code AUGUST and get 50% off.

Best tomato in the world tour

The nearby Guadalhorce Valley has a very special crop in August, the big, red huevo de toro tomato (‘bull’s ball’). It comes bursting with flavour and to celebrate its place as king of the tomatoes, restaurants in Malaga city and the province have created special dishes available on the menu until 31 August. You can see the list of participating venues in Malaga here.

The summer programme of outdoor cinema (Cine Abierto) continues until the end of August with free viewings at different locations in Malaga. Films are mostly dubbed in Spanish, but there’s something pretty magical about watching a movie with a gentle evening breeze in your face (masked this year). For the full Cine Abierto programme click here.

The Albeniz Cinema (on Calle Alcazabilla, just next to the Roman Theatre) is showing the best films in the 21st century on Tuesdays and Wednesdays during August at 10pm. The films are in their original version with Spanish subtitles:

Tickets costs €4 and are available from the cinema ticket office, usually open from 5pm onwards. You can buy tickets in advance.

The Albeniz Cinema (Calle Alcazabilla) is also screening three films by German director, Ernst Lubitsch. The classic films, some are silent, are shown in their original language with Spanish subtitles and start at 8.30pm. Tickets cost €4.50 and are available at the ticket office, open daily from 5pm onwards.

The lovely Concepción Botanical Gardens have evening guided tours on 6, 20 and 27 August. The tours last for 90 minutes and include the historic part of the garden, the old library in the house and the romantic mirador. They cost €7.50 per person and must be pre-booked by calling 951 926 180. Possibly one of the coolest spots to be in the city on a hot summer evening!

There are also dramatised visits – for children on 4 and 26 August and evening performances when key figures from the garden’s history provide the tour on 5 and 19 August. For information on times and prices, call 951 926 180. 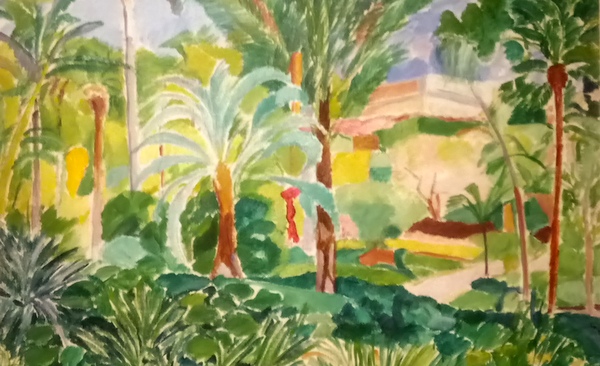 What’s on in Malaga in August musically

The best of local and Spanish alternative pop and rock bands arrive in Malaga for the 6-day festival (23-29 August). There are 3 venues for the concerts: Botanical Gardens, Gibralfaro Castle and the Tabacalera grounds (outside the Russian and Car Museums). Tickets cost €20 and all proceeds go to the Red Cross. Link to buy tickets and more information here.

The MuTe duo perform pieces by Gaspar Sanz, Giuliani, Celso Machado, Granados, Domenico Scarlatti and Wilfried Westerlinck at the Jorge Rando Museum (on Calle Cruz del Molinillo, at the north end of Calle Ollerías) on Friday 20 August at 7.30pm. Entry is free but you need to book your tickets via the email Info@museojorgerando.org.

Thursdays in the park

The municipal band from La Paz district performs a series of free concerts in parks on the west side of the city centre, including the one we look at from the Guide to Malaga office window! All are free and start at 8.30pm.

See the iconic artists in a multimedia art experience at Muelle Uno. 12 giant screens and surround-sound display works from some of the greatest artists from this 19th-century genre. They include Cezanne, Degas, Manet, Monet, Renoir, Toulouse-Lautrec and Van Gogh.

Open Wednesday to Monday 11am to 10pm. Tickets cost €11 for adults during the week and €13 at weekends. Family ticket packages are also available. Visits take place on the hour and last around an hour. Ticket purchase online here. Until 5 September.

What’s on in Malaga in August at the art museums

Some of the best things to do in Malaga in August take place at the city’s art museums. This month you can see:

Note that you need to wear a mask inside all museums and maintain social distancing (2m).

This art museum in Malaga recently opened a new permanent exhibition and also has 2 temporary ones.

This year’s exhibition takes War and Peace as its central theme with 183 works by Russian masters and French and German artists with ties with Russia. Expect to see references to epic battles, the October Revolution and World War I. The works include, as always, paintings and sculptures and provide unique insight into Russian life and culture.

Joining the main exhibition are two smaller ones: Ivan Aivazovsky and Seascapes – 26 works by this master of painting water plus 13 others by his contemporaries. And appropriately given the title of the sister exhibition, Tolstoy – the Path of Life. The watercolours and illustrations explore Tolstoy’s friendships with figures in Russian society and show scenes from some of his most famous novels.

Read about the latest art exhibition at the Russian Museum.

Open Tuesday to Sunday 9.30am to 8pm. Permanent exhibition €6, temporary exhibitions €4, €8 combined ticket. Free Sunday 2 May all day and on Sundays after 5pm.

The eclectic contemporary art museum has 3 exhibitions on this month:

Franz West – Last Decades. Showcasing work by the Austrian who was one of the influential contemporary artists in Europe during the 60s and 70s. The exhibition includes 35 of his works that encompass his iconic chairs, sculptures and collages. Until 29 August. 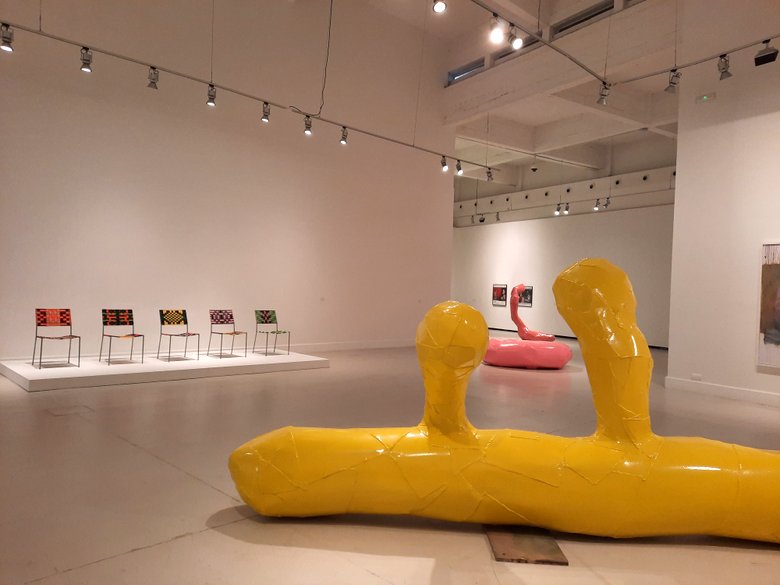 Don Bergland – The Silence of Eternity. The first European exhibition for the Canadian artist and it includes some works created especially for the occasion. Expect to see lots of sheep, meat and dreamlike scenes. Until 12 September. 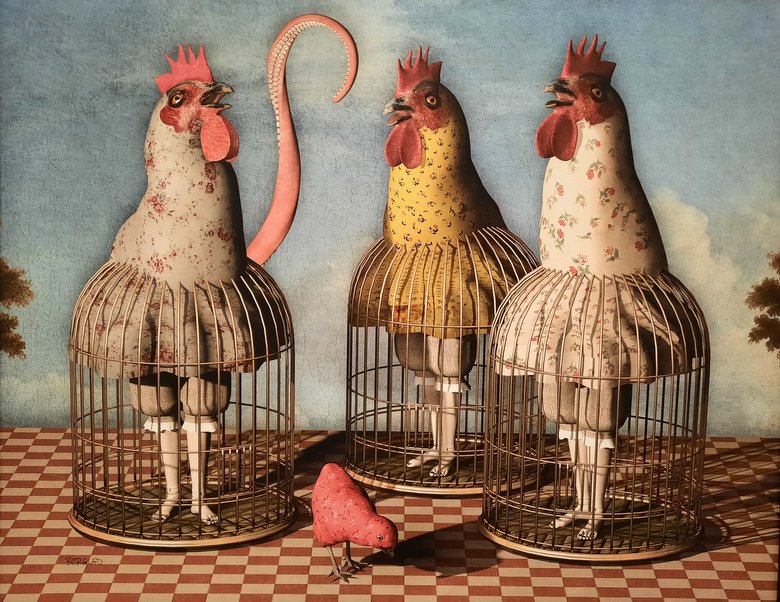 Politics. Part of the CAC collection with works by Ivan Pérez, Aideen Barry and Daniel Richter and reflecting on war, politics and power in today’s society (now there’s a meaty topic!). Until 29 August.

While you’re there, don’t miss the permanent collection and Neighbours. CAC also has one of the best museum shops in Malaga especially if you’re looking for a book about art!

The museum has just celebrated its tenth anniversary and continues to showcase Spanish art from the 18th and 19th centuries seen in the permanent collection.

A temporary exhibition, Painting Light, Catalan Masters, has artworks from 36 artists from the 19th and 20th centuries. They include Fortuny, Anglada-Camarasa, Tapiès and Súner. Until 17 October.

Open Tuesday to Sunday 10am to 8pm. €10 (including main collection).

The Carmen Thyssen Museum has a lovely café serving coffee, light snacks and lunch. There’s a daily lunchtime menu, which is excellent value for €11.90.

See where to eat out in Malaga

The most-visited museum in southern Spain has a permanent collection, called Conversations with Picasso 2020-2023. The exhibition explores 8 decades of artistic creativity from the 20th century’s greatest artist. The Museum has just opened a new room (Sala XII) showing 19 ceramics and 3 paintings created by Picasso between 1931 and 1962. You can also see 22 works from his La Californie sketchbook, which he drew in Cannes in 1956. 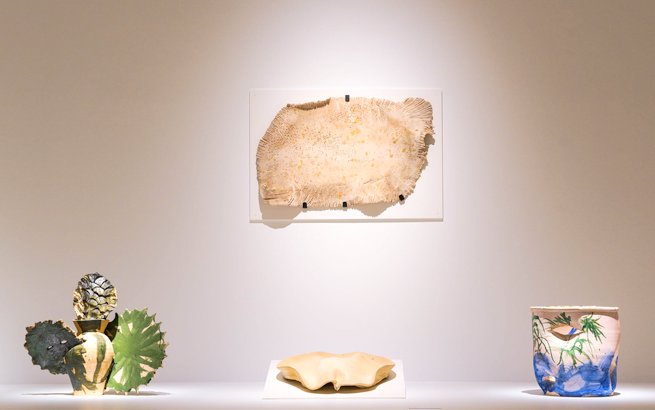 Metamorphosis by Miquel Barceló is in Malaga. Spain’s most famous contemporary artist has nearly 100 works on display that he created between 2014 and 2020. They include ceramics, paintings, watercolours, travel journals and 7 giant bronze ‘matchstick’ sculptures on display in the central patio. Like Picasso, Barceló sees “every piece of work as experimental”. Until September.

Open daily 11am to 7pm. Tickets €12 for both exhibitions, €8 Barceló, free Sundays after 5pm. Note that the Picasso Museum café is closed at the moment 😞

The multi-coloured cube recently opened its latest permanent exhibition, A Century of Spanish Art from Miró to Barceló. As usual, you can expect to see an eclectic collection of paintings, videos, installations and sculptures. Read about the latest art.exhibition in Malaga here.

Spanish artist Julio González has a dedicated exhibition at the Pompidou Centre until 17 October. You can see 33 drawings and 18 sculptures by the Catalan artist, exiled in France like Picasso.

Open Wednesday to Monday 9.30am to 6pm. €7 for the permanent exhibition, €9 for both. Free Sundays after 4pm.

Markets in Malaga in August

Arts and crafts – El Zoco market at Muelle Uno takes place every Sunday with socially distanced stalls from noon to 9pm. There’s also a general market open daily from 11am to 11pm in the area opposite the Pompidou Centre.

El Paseo market – on the Malagueta seafront with stalls selling arts and crafts on Sunday 8 August from 11am to 7pm.

Organic Markets – the best summer fruit (think melons, watermelon, peaches…) and vegetables are now in season and these markets sell them plus products, all grown and produced locally in the Guadalhorce River valley. Saturday 7 August on Calle Cervantes and Paseo de Reding (near La Malagueta) and Saturday 21 August in Huelin Park. 10am to 2pm.

Read more about markets in Malaga.