Malaga carnival is one of the fun highlights of the year, and in 2023, carnival fans don’t have long to wait. Carnival events in Malaga start on 11 February this year.

If you’re looking to let your hair down by joining in the fun or just like the idea of looking on, read our guide to what’s on in Malaga during carnival. We’ve also included tips on where to buy that essential fancy dress for full Malaga carnival enjoyment!

Preparations start early for Malaga carnival. The special carnival lights are up in Calle Larios – replacing the Christmas lights – the harlequin is in place next to the Marqués de Larios statue and the official carnival poster has been released. 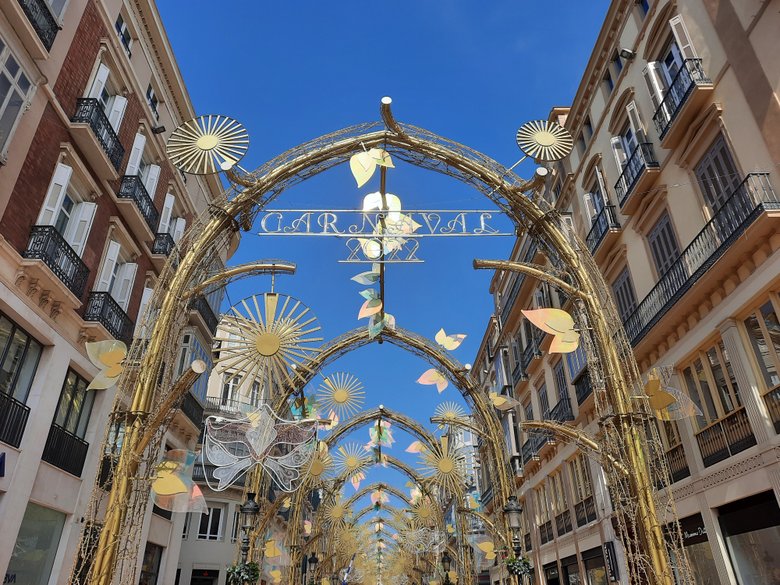 Events start on Saturday 11 February and last until the following Sunday (19 February). Most events happen on Plaza de la Constitución where the action takes place on a giant stage.

This is the official start of Malaga carnival events with the grand opening at 8pm plus the selection of the carnival Gods (god and goddess) who will officially represent the carnival during the week.

Official carnival parade – starts in Pasillo de Santo Domingo on the west side of the river and the floats accompanied by lots of people in fancy dress make their way through the historic centre to Plaza de la Merced. Parade starts from 5.30pm.

The search to find the best group of carnival music players (the satirical songs and music are known as comparsas and chirigotas) goes on throughout the historic centre. Concerts take place every early evening from 8pm onwards on the Plaza de la Constitución. You may not understand the words to the songs, but there’s always a fun atmosphere with lots of music and dancing.

Battle of the Flowers – a brightly coloured parade throws confetti and streamers into the crowd before the final shower of thousands of petals. From 6pm in Calle Larios.

Gran boqueroná – literally a huge fried anchovy and a culinary highlight during Malaga carnival. Get your free portion of fried anchovies at Plaza de la Constitución from 1pm. Not sure how to eat them? Check out our guide.

The burial of the anchovy – carnival always comes to a tragic end in Spain and Malaga is no exception. Most of Spain buries a sardine to mark the end of festivities and the start of Lent, but Malaga buries an anchovy. The Entierro del boquerón parade consists of official mourners dressed in widow’s weeds and weeping, and a giant boquerón whose end comes on a huge bonfire on La Malagueta beach. 5-8pm from Plaza de la Constitución throughout Malaga Port, Muelle Uno and to La Malagueta beach.

Luis Casquilla (Calle Juan de Padilla 12, off Plaza Uncibay) and Party Land (Paseo de Reding 47, near the bullring) have a great selection of costumes, make-up and accessories for the best Malaga carnival outfits. If you’re planning on making your own, head for one of the many material shops in Malaga. We like Ribes Casals behind Atarazanas Market but if you’re looking for cheap remnants, try El Kilo in Calle de Liborio García, off Calle Nueva.

Carnival is just 1 of the annual events in Malaga. For information on the rest, sign up for our free fortnightly newsletter. All you need to know about what’s on and what’s new in the city in your inbox every other Friday.