You are here: Home / Need to know / Expats in Malaga / Fred Shively – Nowhere else made a lasting impression

Fred Shively – Nowhere else made a lasting impression

Malaga somehow never fails to create an impression and often a lasting one, especially among foreigners living in Malaga. This is certainly the case in the next of our series of expats in Malaga when we talk to Fred Shively, a long-time expat in Spain originally from the US.

Desperately in need of an urban fix after having spent the previous decade in the ‘outback’ aka the Alpujarra. Don’t get me wrong, the campo experience, particularly the Alpujarra, was a fantastic introduction to – and immersion into – Andalusian rural life. And great fodder for my camera and my wife’s writing.

Authenticity, vibrancy, potential. Our first real encounter with the city actually came in 2008 when Arpi (my wife) was tasked with writing the Andalusian section of Lonely Planet’s Spain guide. Nowhere else in Andalusia made quite the same lasting impression. Obviously Granada, Seville and Cordoba presented – and still present – well, for all the obvious reasons. And Cadiz, despite its slight down-at-heel-ness, was captivating. But ultimately Malaga stuck. And has rarely disappointed.

DISCOVER THINGS TO DO IN MALAGA

The constant, ongoing realization of its potential. Particularly in areas such as the arts. It seems to be a city with purpose: to maintain its Spanishness and to an extent its Andalusian character while attempting (quite successfully) to position itself as a ‘powerhouse’ city as well as one of the best destinations in Iberia.

The two-edged sword of it becoming a very serious holiday destination. On the one hand the influx of visitors (e.g. via cruise liners) is an obvious boon to local commerce – although some would say otherwise. On the other, because it’s not a huge city in terms of footprint it could become rapidly overwhelmed.

Tough one. Depends on mood. Our ‘hood (La Victoria) constantly delights and delivers and has the extra benefit of an excellent woodsie walk minutes from our flat. The lower end of Carreteria which is seeing interesting rejuvenation (e.g. Julia’s Bakery, Brunchit) exerts a pull. Plaza Merced now bolstered by its foodie Mercado make-over and array of great outdoor bars, restaurants, cafes. But I have to say that the gravitational draw of Atarazanas market always increases my pulse rate and smile quotient.

Even tougher than the previous question! I’m going to cheat and nominate a few. For lunch, Café Bar Nerva in Cristo de la Epidemia, hands down. A neighbourhood place that rarely disappoints. For out and out value, super-fresh seafood, Atarazanas Market Bar. You’ll not find a better skewer of fat, grilled, paprika’d prawns anywhere else. Finally, for consistent high quality and the best pulpo a la Gallega this side of A Coruna, head for Refectorium Catedral.

DISCOVER WHERE ELSE TO EAT IN MALAGA 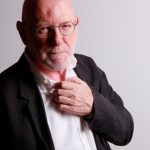 Fred Shively was born in Pennsylvania USA. After studying radio and TV journalism at university, he moved to England with the US military,
then began a long career in advertising and corporate communications. Working with outstanding designers, photographers, musicians and
filmmakers helped shape Fred’s skills and creative vision. Fred’s photography has been shown in several US East Coast galleries, in various
UK magazines and in galleries and publications in Spain.

Guide to Malaga would like to thank Fred very much for his insight into Malaga and for taking the time to write down his thoughts for us. ¡Muchas gracias!