You are here: Home / Need to know / Expats in Malaga / Malaga is quality of life

Malaga is quality of life

The latest in our series of Malaga expat interviews discovers what Ben Kolp from The Living Room has to say about Malaga. Read to discover why Malaga won him over and why the city offers him quality of life.

I arrived to Malaga at the end of 2010, so I’ll soon be celebrating my 10 years anniversary on the Costa del Sol.

What brought you to Malaga?

Originally my Erasmus semester brought me to Spain, Granada to be exact. That was back in summer 2008 and I was supposed to stay for 6 months. Well, I’m still around! After my official Erasmus semester I extended my stay by studying my Master’s degree in business informatics remotely. During the first year of that Master I simply lived in Granada, had way too many cañas (small beers) and tapas, studied a bit and flew to Vienna, back to my home country Austria, for my final exams at the end of each semester. For the second year of my degree I decided to actually do something and look for a job to cut down on the caña and tapa consumption. I was lucky enough to make it through the interview process at Oracle, which brought me from the city at the foot of Sierra Nevada to the coast.

Initially I was sceptical. I was hopelessly in love with Granada and its enchanting character. All the valuable moments I’ve lived and treasured there during my student life made it hard to let go of that beautiful city and find another one, that would inevitably have to compete with Granada for that special place in my heart. I still remember Malagueños telling me that I’d change my mind. And I have to admit, no longer being a student, Malaga did win me over.

Granada is an amazing city to live in when you study. Imagine a place with over 230.000 inhabitants and a university teaching close to 70.000 students. On the flipside, that young students’ community doesn’t offer much space for industry to settle and companies to grow. Apart from the university, Granada lives from tourism, but finding a job in other sectors is challenging. As a freelancer and nowadays business owner of The Living Room Coworking, I’ve come to appreciate Malaga’s immense quality of life whilst at the same time offering an interesting ecosystem of like-minded entrepreneurs.

Over the last 10 years, I think Malaga has made a huge jump from being a big “pueblo” to becoming a vibrant city with a very international touch. It was very rare to hear any other languages but Spanish on the streets (which was great for my own learning curve). Shops and cafes were very much traditional family-owned places, which would close during for “siesta”. Many parts of the city were either none accessible (like Muelle Uno) or not in safe conditions to access (like Soho). All of that has changed tremendously over the last 10 years, maybe even going a little bit too far sometimes.

In my humble opinion. Malaga continues to offer great quality of life, an amazing vibe, good food, and nice people, but even the Malagueños themselves are starting to move out of Malaga driven away by ridiculous rental prices – AirBnB seems to be more profitable than long-term rent for landlords these days – and the huge crowds drawn by Easter Week, the Fair (or the summer months in general) and Christmas. I love Malaga. I have my family in Malaga and I’ll stay in Malaga, but I’d like the city to be careful not to trade too much of its charm and personality for profit by converting the city center into a huge theme park. (Editor’s note: well said Ben 😊)

The weather; without a doubt. When I was in Granada, it was freezing given the cold winds coming down from the Veleta peak in winter and too hot to do anything, but refresh yourself with a sparkling caña in summer. Malaga is in this fortunate position, where the climate is nicely balanced with mild temperatures all year around.

Although some expats still escape during the hot summer months and use the time to visit their home countries up north, I’ve always been more of a summer person and could sunbathe all through July and August. You might ask yourself, whether this Austrian boy doesn’t miss the snow and the mountains though, don’t you? Well, by having Sierra Nevada as close as just a 1.5 hours car ride plus the opportunity to ski and take a dip into the sea on the same day, I really don’t know what else to ask for. Malaga has it all.

I seriously had a hard time thinking of a good answer here, but if I really had to find something I don’t like it might be a certain Spanish personality trait. Don’t get me wrong: I love everything about Malaga and especially its people. The relaxed attitude and the art of knowing how to enjoy life is something that I admire, want to learn better and means I’m no longer capable of living back home in Austria.

Although one thing I don’t like is the lack of awareness for a socially comfortable environment for everyone. Even though the Malagueños are the loveliest and most caring people when it comes to their family and friends, they can be equally careless when it comes to others. It starts with little things like stopping your car in the middle of the lane, just because the shop you are going to is right there and you can’t be bothered to walk, which causes all other cars to honk at you and ends up in a proper traffic jam.

It gains more weight in important situations like negotiations. Hardly anyone plays with open cards and people tend to follow their own agendas pointed towards their personal gain. And if you, as a foreigner actually openly speak your mind, you’ve already lost parts of the battle. Not to mention, but probably the result of taking this selfish mindset to the major league, politics and corruption.

To show you my favourite “rincón” (corner in Spanish), I’d take you to the village I currently live in: Rincón de la Victoria. I just love to walk by the sea, crossing from Rincón de la Victoria through the tunnels of El Cantal over to La Cala del Moral. That walk with its breathtaking views out onto the sea and all the way to the bay of Malaga is most certainly my favourite corner.

Apart from the before mentioned weather and its people, another key ingredient that has made Malaga my new home is the food. I’m a big fish and seafood fan, which leads me to give a shout out to Los Cuñaos in El Palo as my favourite restaurant. The winning dishes for me are their more than tasty Fideuá and their squid, slowly cooked over open fire on a skewer (calamar espetado). My tip would be to go with a bigger group of 5-10 people, order all sort of dishes and share them the Spanish way. You’ll get to try an amazing variety of incredible food and won’t pay more than around €15 (drinks included) per person.

DISCOVER WHERE ELSE TO EAT IN MALAGA 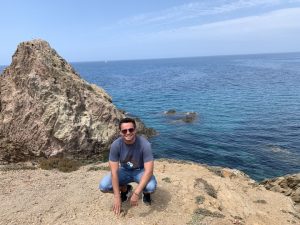 Ben is an intrinsically driven entrepreneur fascinated by the power of networking, both online and – believe it or not – offline. He made it his personal mission to network, connect & synergise wherever he goes. By simply listening Ben learns from others about what they are good at and what they could use help with. This puts Ben in the unique position to connect people and craft synergising relationships. These personality traits and this passion have lead Ben to open Malaga’s international coworking space, The Living Room. By serving the entrepreneurial ecosystem in Malaga, Ben always thrives towards that same goal: a smile on people’s faces caused by win-win-win synergies.

If you’re inspired by Ben’s story or curious to find out what other expats in Malaga think of the city, you might also like:

You can read all the interviews in our expats in Malaga series here.