You are here: Home / Need to know / Getting to and around / Getting around Malaga by bike

Getting around Malaga by bike

It might be Spain’s sixth largest city, but Malaga is surprisingly compact and the old quarter occupies a small part of the city. Add this to the fact that it’s almost totally flat and getting around Malaga becomes very easy

You should be able to do most of central Malaga on foot, but if you want to venture further afield then you’ll need your own wheels or public transport. This 3-part guide tells you all you need to know about getting around Malaga. In this first section, we look at cycling in Malaga and the practicalities behind using a bike in the city. You can read about getting around Malaga by bus here and about driving in Malaga here.

As Spanish cities go, Malaga ranks as one of the most bike-friendly. There are miles of designated cycle tracks (painted bright red) round the city, lots of bike parking zones and this is a flat city so no puffing up and down hills.

Cycling in Malaga gives you the chance to explore the seafront, east and west, and take yourself out to the Guadalhorce River Nature Reserve near the airport. But even if you’re not feeling that energetic, using a bike makes a great way of sightseeing in Malaga. There are two options for getting round Malaga on two wheels:

SEE MORE ABOUT GETTING AROUND MALAGA

The City Council abolished the bike-hire scheme (MalagaBici) in November 2021 and has invited private companies to provide electric bikes that you hire via a mobile phone app. These bikes are available at bike stations and in electric scooter parking areas around the city. To use one of these bikes, you need to do the following:

There are around 20 bike stations in the city centre and numerous scooter parking areas. You will also find the bikes at random places around the city – check the app for exact locations.

Hiring a bike in Malaga

Several companies rent bikes in Malaga including Bike Tour Malaga. Several hotels also offer bike hire to clients. Make sure the fee includes insurance and don’t ride away without a lock for the bike. 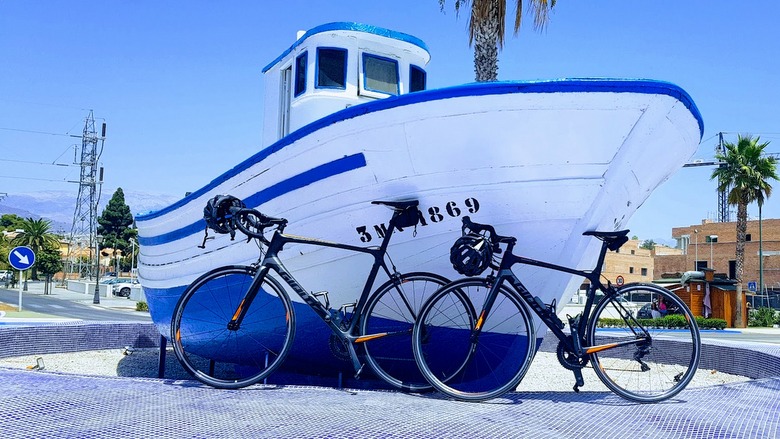 Cyclemalaga.com are leading bike rental specialists in Malaga, renting giant carbon race bikes to individuals and large groups of up to 30 cyclists. With their bespoke delivery service, your bike is waiting for you when you arrive at your accommodation in Malaga so you can start your cycling holiday straight away!

When you’re cycling in Malaga, be sure to follow the rules below. There are fines for non-compliance (from €60) and the local police are on constant lock-out for offenders!

For more information about getting around Malaga including a guide to Malaga Airport and Malaga bus services, check out our Getting to & Around Malaga section.