Guide to the Russian Museum in Malaga

Note that for obvious reasons, the Russian Museum in Malaga is no longer exhibiting pictures from the Russian State Museum in St Petersburg. The museum space has alternatives exhibitions, details of which are in our monthly round-up of events in Malaga.

Note that this article refers to an exhibition on show until April 2022.

War and Peace in Russian art

The exhibition looks at the depiction of the many wars that Russia has fought, both at home and on its borders over the last five centuries. It also takes a look at peacetime and shows the fine line between the two polar opposites.

While some of the works could be from any country – war and peace are, after all, universal, certain sections (particularly the portraits) are uniquely Russian. There are also occasional nods to the Soviet regime, but far fewer than previous exhibitions. And as always, you are treated to a feast of fine artworks quite unlike any others in western European museums. Of the six annual exhibitions at the Museum, we think this is one of the most ambitious so far.

Exhibitions at the Russian Museum in Malaga have in the past opened with a collection of older paintings – icons in particular have featured. And this year’s starts with three of these types of artwork. St Nicholas of Mira shows his life, including a battle or two, in 16 scenes. 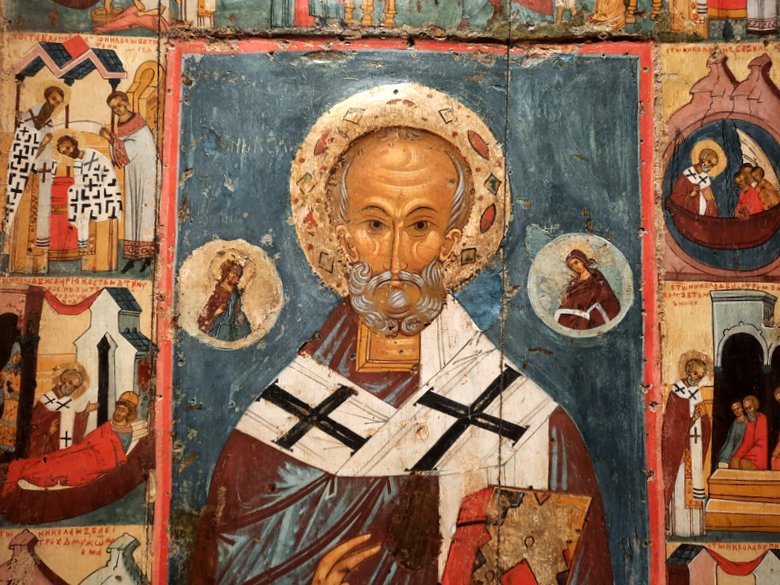 The older paintings share the room with the Rise of Russia from the 9th to the 12th centuries. Here, we discover St George and the dragon (a universal battle), Russian warriors in bronze plus figures of heroes in Russian wars. Many of the works, like those exhibited in the Tzar collection a couple of years ago, were painted comparatively recently. The Entrance of Alexander Nevsky after the Battle on Ice, for example, depicts a battle that took place in 1242 but the painting by Vladimir Serov dates from 1945.

As you’d expect, the exhibition comes with many of the crueller sides of war – Ivan the Terrible makes his annual appearance at the Russian Museum in Malaga. He has a particularly fiery-eyed expression in his Conquest of Kazán. There are also scenes of abject violence with no details spared and you can almost feel the pain and despair of the injured through the canvas.

We’ll confess that prior to our visit, we knew that Russia had fought a lot of wars, but we hadn’t quite realised how many. Different rooms are dedicated to different battles such as the Polish-Swedish Intervention (1598 to 1613) and the Northern War with Sweden (again) in 1780-1721. Napoleon makes an inevitable appearance in the Patriotic War of 1812 before the exhibition moves on to the Crimean War in 1853.

Russia then moved on to the conquest of central Asia, a 20-year campaign from 1860 to 1880. Judging by the graphic paintings, it was a hot, dusty and bloody time. The Russian-Turkish War followed suit – two very detailed paintings show the Grand Duke Nicholas Nikolayevich entering conquered cities in Turkish territory.

The final two rooms look at 20th-century war in Russia when the country suffered a decade of continual conflict with World War I, the October Revolution and the Civil War. World War II gets the title of Great Patriotic War and this section has perhaps the most poignant artworks. There are, however, some very modern takes of war in this room including the extraordinary Siberian Partisans by Yuri Khrzhanosky (detail below).

War heroes appear such as Dmitry of the Don, Prince of Moscow and leader of the battle against the Mongols. Three large oil paintings show him mortally wounded in battle. Many generals make an appearance including two portraits by British artist George Dawe, the only foreign painter in the exhibition. He painted no less than 392 portraits of Russian generals active during the campaign against Napoleon.

The exhibition is dotted with sculptures of bronze warriors as well as objects such as vases, wall lights, furniture and porcelain. They all give you an idea of the opulence of high Russian society during the 19th century – there are most in the room dedicated to the Crimean War.

As well as the heroics and the macabre side of war, civilians also take centre stage. There are many dramatic paintings of sieges and refugees, women and children mostly.

And many of the artworks show the grief at the departure of soldiers for the front or the happiness of their return. One of our favourites was the bright Letter from the Front by Alexander Laktionov.

But although war and battles make up the majority of the over 180 works on display in this exhibition at the Russian Museum in Malaga, there are also plenty of scenes from peacetime. You see craftsman, women working the fields and soldiers enjoying leave. However, they’re definitely in a minority leaving with the conclusion that Russian history for the last few centuries has been more about war than peace. But then you could say the same about so many European countries. 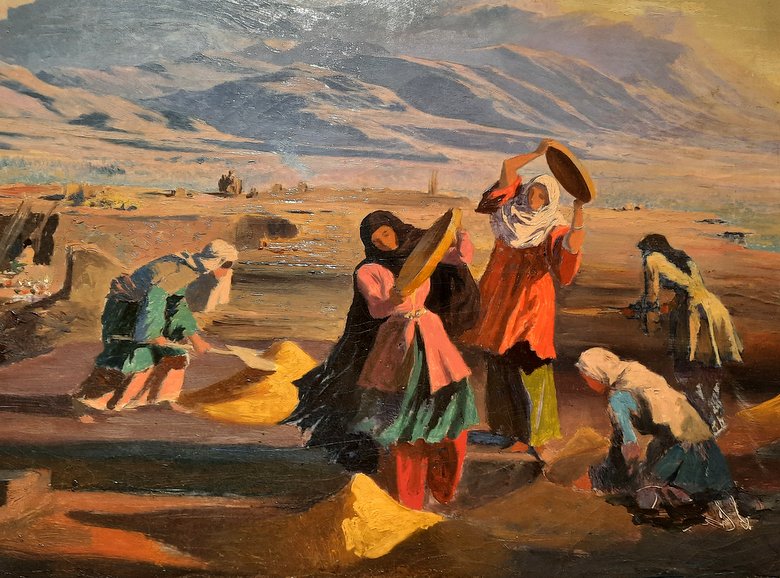 Getting to the Russian Museum

The Russian Museum opens Tuesday to Sunday from 9.30am to 8pm.

Free admission on Sundays after 5pm.

The Russian Museum is fully accessible.

Time to allow for visit

Allow at least an hour to see War & Peace.

Note that the café and shop are currently closed because of covid-19 restrictions.

The café inside the Russian Museum serves tasty coffee and infusions plus a good range of cakes and snacks. They also do a menu of the day (choice of 2 starters and mains) for €9.80.

On the nearby western seafront there are lots of excellent fish restaurants and cafés.

This is one of the great museums in Malaga. Discover all the others and decide which to visit while you’re on holiday in the city. And keep up to date with latest exhibitions and events at Malaga museums with our free fortnightly newsletter.