The big wheel is one of the most recent attractions in Malaga and we’re pleased to see that the Malaga ferris wheel appears to be here to stay. Exactly where though is another question.

Editor’s Note: Malaga ferris wheel closed down in April 2019. At the time of writing it wasn’t clear if it would return to a new location. We’ll keep you posted!

In this post, we list the highlights when you ride the Malaga ferris wheel and possible new locations for it.

We recently went for a ride and discovered that the views from the Malaga ferris wheel really do count among the best. We made up a group of 4 and when we arrived for our ride – early evening on a Wednesday in April – there was no one else on the wheel at all. (Nothing like having a prime attraction all to yourself!)

Tip – family groups get a discount – €7 per person instead of the usual €10. But the family must include 2 generations.

My husband and younger daughter suffer from fear of heights so they weren’t quite sure if they’d manage to ride the 3 full circles. However, once they settled down in the cabin their nervousness disappeared because the views were quite simply amazing. 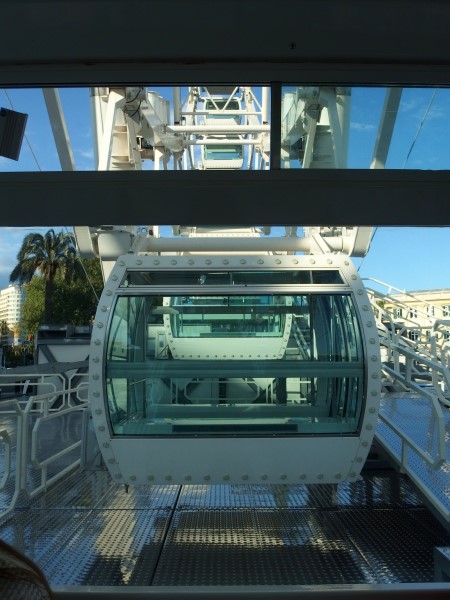 The Malaga ferris wheel stands 70m high so you’re already up above most of the city. The landmarks that stood out for us included:

The pergola – this is already one of my favourite things to see in Malaga and it turns out to be stunning from the top as well as the bottom. We loved seeing the curving line running the entire length of the pergola.

The Cathedral – this monument in Malaga turns out to be lovely from all angles.

Alcazaba Fortress and Gibralfaro Castle – you get a great perspective of both of these Moorish monuments and a real insight into their defensive position.

Industrial port – I knew Malaga port was big, but I didn’t know there was quite so much to the industrial section of it. It was interesting to see all the docks and loading bays from above. 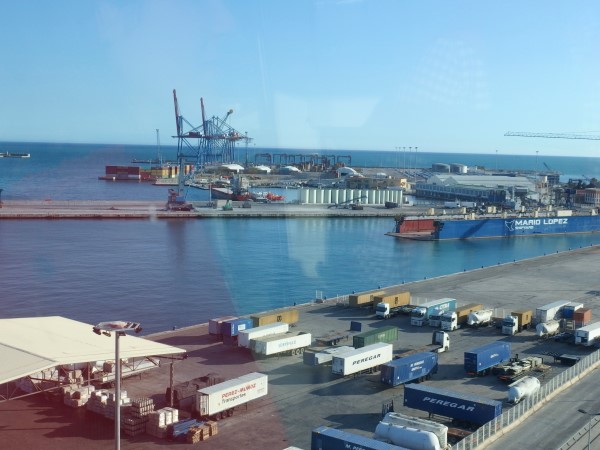 Tallest building – the tallest building in Spain when it went up in 1928, the factory chimney on the western seafront in Malaga still stands tall above everything else. You get a great perspective of its 96 metres from the ferris wheel.

When it went up in August 2015, no one was sure how well the Malaga ferris wheel would do. But it turns out to be more than economically viable and visitor figures have exceeded the company’s expectations – 25,000 people took a ride at Christmas alone. As a result, Malaga council has agreed to renew the concession.

Those involved in the tourism in the city are pleased because the ferris wheel definitely adds positively to the list of attractions in Malaga. But the residents who live in the block opposite the big wheel aren’t so happy.

They do have a point – after years of gazing out at the Melilla ferry and port cranes in the distance, they now look onto a lot of cabins going round and round. And they claim that those inside the cabins are looking at them. So the council and ferris wheel company are putting their heads together to find an alternative location.

Next to the Melilla ferry. This spot would mirror the current perspective and views of Malaga from the wheel and is the company’s favourite (probably because they don’t have to move the wheel too far). But Malaga Port authorities aren’t so enthusiastic about this one because they say the ferris wheel could obstruct lorries driving on and off the ferry. And would this be far enough away from the flats?

El Palmeral. This location would give a slightly different view of Malaga (and include a bird’s eye view directly over the top of the pergola). Malaga Port like this one, but Malaga City planners aren’t so keen. They’re worried that the ferris wheel would be in the way of the pergola (they could have a point here).

Muelle Uno. An aquarium was originally planned for this spot (currently home to Casa de Botes, a pretty average fish restaurant with bigger than average prices), but interest in investing in the aquarium seems to have dried up meaning this prime location on Malaga Port is up for grabs. It would also place the ferris wheel nicely for the skyscraper hotel near the cruise terminal. This spot gets the thumbs up from the ferris wheel company, the council and the port authorities, and the views would certainly be good. But if the big wheel went here, it would mean an end to all those lovely photos of the ferris wheel and the sunset behind it…

Muelle 4. This is the least likely option (although you never know in Malaga) mainly because of the lack of firm plans for this area of the port – between the wheel’s current location and the railway bridge over the river. This spot would add life to this rather abandoned part of the port and make it more part of Soho, but maybe it’s too far from other attractions in Malaga.

Even better than best views of Malaga

The good news is that whatever its new location, Malaga ferris wheel is here to stay – we think it’s a great addition to things to do in Malaga and a much-needed family-friendly attraction. And wherever it ends up, the ferris wheel will see some upgrades – the cabins will be made bigger and the span will go from 70 to 100 metres. A height that will end the industrial chimney’s 88-year reign are the tallest building in Malaga and provide views of Malaga beyond spectacular. We’ll keep you posted!