As well as lots of museums and monuments, Malaga also does some stunning churches. Along with the queen of them all, the Cathedral, the city centre comes packed with churches and chapels. Most have surprisingly rich interiors and house sumptuous statues and imagery. Whether you’re religious or not, it’s worth popping in the following churches in Malaga.

Notes on churches in Malaga

Opening hours: We’ve provided opening hours but bear in mind that they’re not 100% accurate and you may find the doors closed. This might be because there’s a wedding, christening or funeral, or simply because the person in charge is running late.

Mass: Most city centre churches in Malaga celebrate mass on a daily basis with often more than one service. If there’s one going on when you go in, pop back later when it’s finished.
And as always, we’ve included a map of where you’ll find the churches listed below.

Known as La Manquita (the one-armed lady) because it only has one tower – the other was never finished because of lack of funds – Malaga’s cathedral combines Renaissance and Baroque styles. Built between 1528 and 1782, highlights inside the huge building include the finely-crafted choir stalls by Pedro de Mena, the 18th century organ with 4,000 tubes and some rather gruesome paintings. Free concerts are held throughout the year – arrive extra early to be sure of a seat. 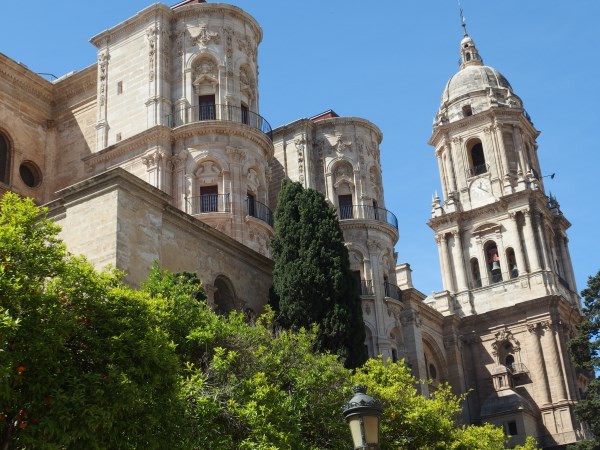 Take a tour of the Cathedral rooftops – stunning views of the city and a close-up look at the tower and terracotta roof domes..

Malaga’s oldest church was built on the site of a mosque so it’s no surprise to see this 15th century church has a striking square tower built in the mudejar style (particularly attractive when lit up at night). Also worthy of note outside is the magnificent doorway with cockle shell design (the symbol of Santiago/ St James).
Extensive restoration work on the church finished in 2017 and whole of the interior has been returned to its former glory. Treats include intricate silverwork and religious paintings, striking stained glass windows and vaulted ceilings. Plus Picasso’s baptism certificate from his christening here in 1881. 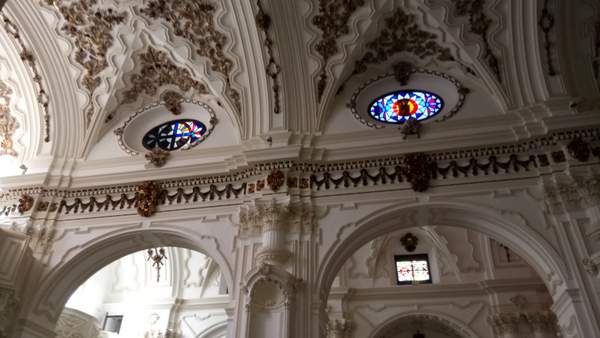 Explore the surrounding area, full of hidden corners and surprises as well as the Picasso Museum. Find out more.

Named after Malaga’s two patron saints, St Ciriaco and St Paula stoned to death by the Romans in the 3rd century, this church has a striking brick façade and a richly-decorated interior in the Rococco style. Home to five of Malaga’s brotherhoods, the church houses several of the Holy Week thrones link including the largest – The Last Supper complete with Jesus and all the disciples. 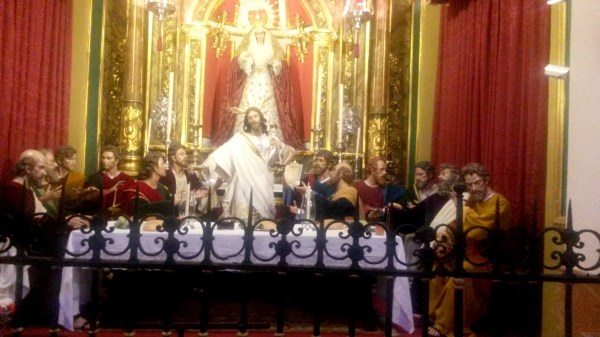 Have a stroll round the nearby streets and alleyways. And don’t miss the vertical garden. Read more here.

Tucked behind Calle Compañía, this is a bit of a challenge to find, but worth making the effort. The oratory is new compared to other churches in Malaga (it was completed in 2007) and entirely decorated in richly coloured frescoes by local artist Raúl Berzosa (see the feature picture to this post above). The striking red and ochre façade copies the Palacio Episcopal. Outside, don’t miss the fragments of the medieval wall and the vertical garden around the corner in Plaza del Pericón.

One of Malaga’s largest churches sits on the site where King Ferdinand set up camp in preparation to conquer Malaga from the Moors in 1487. Little remains of the original chapel but this 17th century church is home to some impressive Rococco plasterwork in the Lady Chapel and a rather sinister crypt where the Count and Countess of Buenavista (their palace is now the Picasso Museum) were buried. 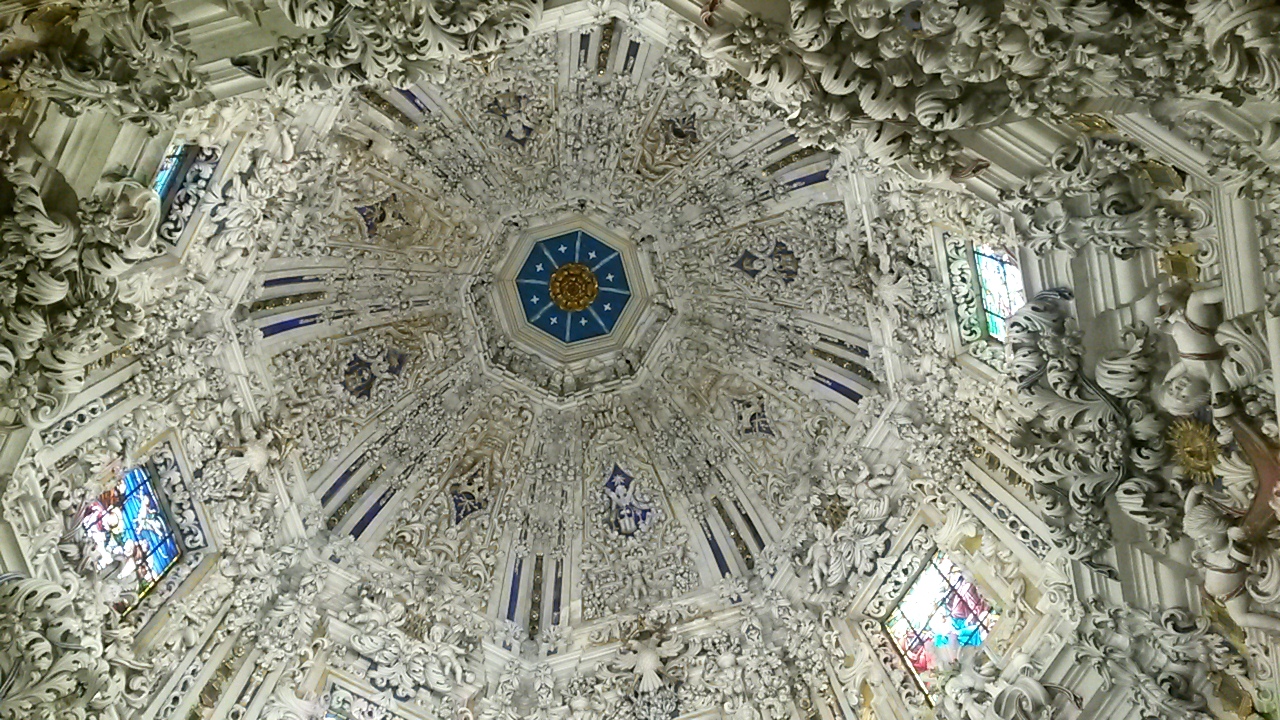 One of the most historic churches in Malaga, this chapel dates back to the early 17th century. It’s small inside but has a remarkable circular ceiling with elaborate design across the dome. Also worth noting are the sculptures and frescoes, all recently restored. 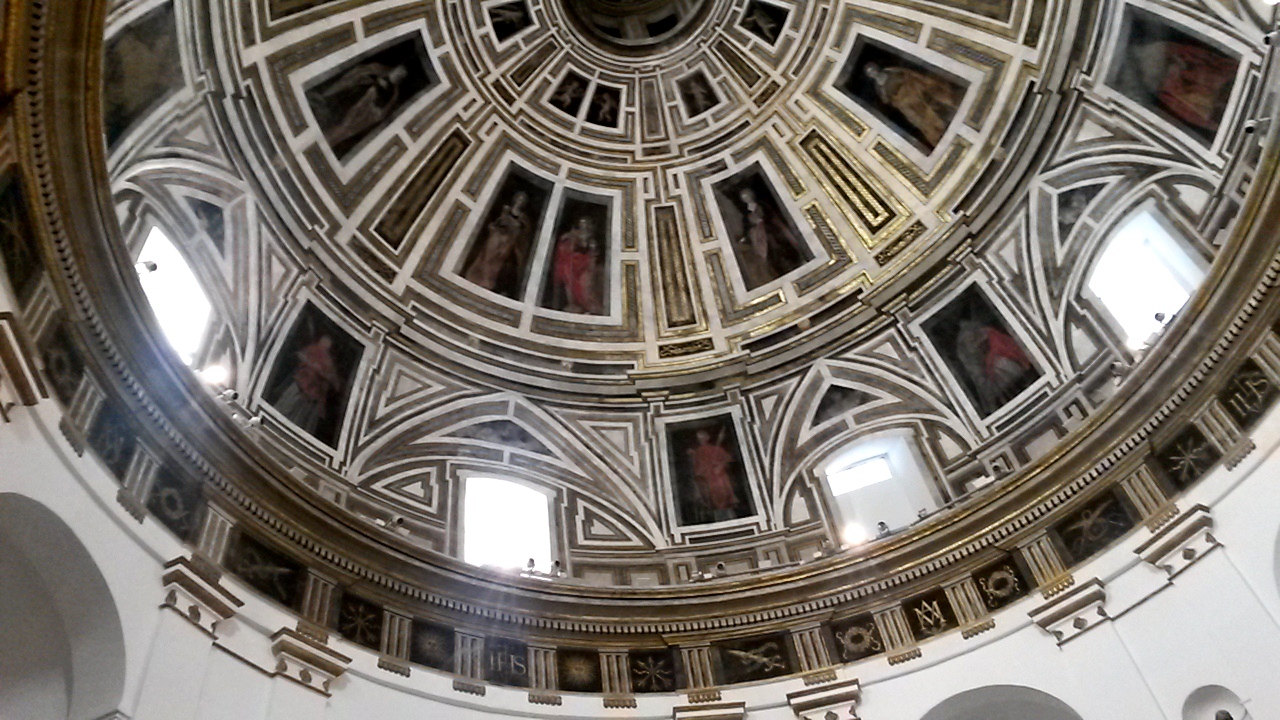 Have a good look at the façades on the Plaza de la Constitución and don’t miss the view of the Cathedral tower from the west side of the square. Read about other squares in Malaga worth visiting.

Like the Iglesia de Santiago, this church has a striking tower, rebuilt in 1776 after the original from the mid-16th century was destroyed by an earthquake in 1680. Also like the Iglesia de Santiago, it has a stunning façade, painted in red and cream diamonds. This is a large church with lofty ceilings decorated in dark grey and white, and numerous statues and imagery around the edges. You’ll notice it’s quite dark in here – churches in Malaga were originally lit by candles and those with small or few windows like San Juan have little natural light.

Browse the shops in the nearby side streets, one of the best places to go shopping in Malaga.

SEE WHERE TO SHOP IN MALAGA

This church belongs to the great family of Malaga architects, the Strachan family who built the Sacred Heart Church in 1920. It has a striking Neo-Gothic style and the architect found his inspiration in the cathedrals in Toledo and Burgos. The fairytale façade and airy interior make this a popular spot for locals to get married. Inside is a feast of stained glass windows – the rose window is a particular highlight. 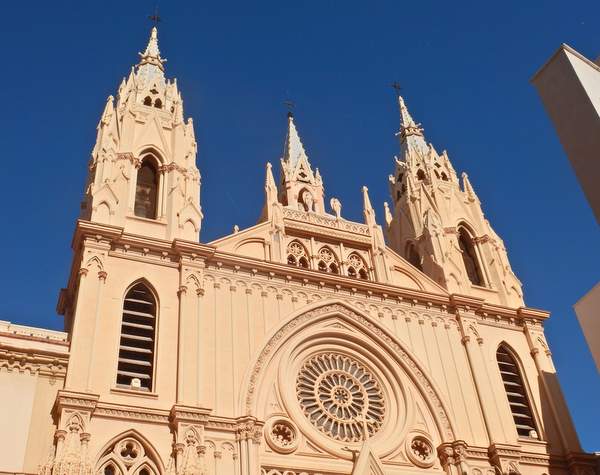 Visit the Carmen Thyssen Museum next door, one of the best art museums in Malaga.

Find these churches in Malaga