15 typical things to eat in Malaga

Guide to Malaga fans often ask what are the most typical things to eat in Malaga. So it makes sense to write a dedicated blog post about the products and recipes that make up the backbone of typical Malaga cuisine. 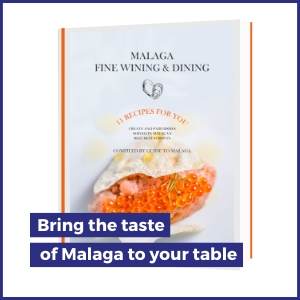 We’ve included a total of 15 items, but it isn’t a definitive list. If you’ve tasted something in Malaga that you think should be on the list, get in touch. The following (in Spanish and in alphabetical order) make up some of the most typical things to eat in Malaga.

You might be surprised to find the humble olive on the list, but these ones are very special. Grown in the area around the village of Álora to the north of the city (and near El Caminito del Rey), these fat, juicy olives are the only ones in Spain to boast a denominación de origen (guarantee of origin) label. Their marinade of thyme, fennel, garlic and pepper gives them a unique bite.

Where can you try and buy them?

There are several stalls at Atarazanas Market selling aceitunas aloreñas. Ask to try before you buy.

The paté-type spread is a popular topping for toast at breakfast (see Molletes and pitufos below). Made with cod (a main ingredient for many typical things to eat in Malaga), garlic, olive oil, paprika and limon juice, ajobacalao has a unique taste.

The best places to try ajobacalao are in bars off the beaten track in Malaga. La Recova (off Calle San Juan) includes it in their daily breakfast menu as do many of the bars in the Perchel district between the Corte Inglés department store and the railway station. 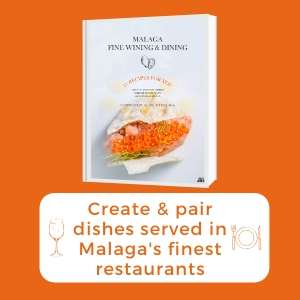 The only soup on this list of typical things to eat in Malaga, ajoblanco is eaten cold in the summer. It’s made with almonds, bread and garlic, and as you’d expect, is pretty filling. Typical topping for this soup include white grapes or melon.

Many restaurants in Malaga serve ajoblanco as a starter in the summer. Uvedoble on Calle Císter include in their menu.

We couldn’t write a list of typical Malaga dishes without including anchovies – after all, locals are called boquerones because it’s the most common fish in Malaga Bay. Anchovies come in a variety of ways:

All beach bars and restaurants in Malaga include boquerones on their menu. You won’t find the real thing in December when fishing is prohibited to allow stocks to replenish.

SEE WHERE TO EAT OUT IN MALAGA

Typical things to eat in Malaga also include the local salad. This one comes with cod, oranges, black olives and tomatoes, all dressed with olive oil. We love the way the sweet acidity of the orange combines with the salty cod and olives. Modern versions of Malaga salad serve it deconstructed so you mix the ingredients yourself.

Where can you try this?

Many beach restaurants serve this as well as another typical Malaga dish – pepper salad, made with roasted peppers, garlic and olive oil.

For us, this is probably the most typical thing to eat in Malaga and definitely a must-try when you’re visiting. An espeto is a wooden stake of sardines, grilled over an open wood fire. Best eaten on the beach and washed down with an ice-cold beer or glass of wine, espetos are a cheap lunch staple – expect to pay between €1.50 and €5 for a portion. You can also try squid and octopus cooked the same way.

Locals eat their sardines with their hands – watch and learn from this video!

At most beach restaurants in Malaga, especially in El Palo where just about every restaurant serves them. In the city centre you can eat them at El Mercado de la Merced where there’s a wood-burning oven to grill the sardines.

Top tip – sardines taste their best in months without an ‘r’ in them so May to August.

Just down the road from Malaga is a tropical fruit paradise. The weather conditions in and around Vélez-Málaga are perfect for growing of tropical fruit – custard apples, mangos, avocado, papayas, kumquat, medlar fruit…

The fruit stalls at Atarazanas Market are the best place to buy these typical things to eat in Malaga. And in season, you’ll find tropical fruits surprisingly cheap.

SEE WHERE TO GO FOOD SHOPPING IN CENTRAL MALAGA

A great comfort-food dish, gazpachuelo is a cross between a starter and a stew. It’s 1 of those dishes whose recipe has been handed down through the generation and so every bar and restaurant makes it in a slightly different way.

While it might sound like gazpacho, gazpachuelo actually couldn’t be more different from the typical Andalusian summer soup. It’s a cream colour for a start and always eaten hot. The basic ingredients include potatoes, garlic, fish and mayonnaise. Some restaurants add seafood like clams and prawns. Don’t be deceived by its soup-like appearance – this is a rich dish and almost a meal in its own right.

Gazpachuelo forms part of the menu in many Malaga restaurants in the winter – Eboka does a particularly delicious take on this dish. Typically, it’s 1 of the choices for a starter on a menu of the day.

Like raisins (see below), figs are a staple part of the traditional Malaga diet. Lots of dessert recipes include figs and you can also buy dried figs by the kilo or in the form of a ‘cake’ (torta de higos). They taste best in season at the beginning of autumn. You can find fresh figs on sale in mid-spring (these large purple figs are known as brevas) and in September (the smaller, green version).

Fresh figs are available at Atarazanas Market and if you want to buy a torta de higos, pop along to La Mallorquina on Plaza Felix Saenz, a great shop for all sorts of typical Malaga produce.

READ OUR GUIDE TO EATING OUT IN MALAGA

Next up on our list of typical things to eat in Malaga are molletes, a flat bread roll, traditionally made in Antequera. The sponge-like texture of the molletes mean they absorb lots of olive oil and tomato, and make a great breakfast alternative to toast. They’re also good with ajobacalao spread.

And while we’re talking about breakfast, we couldn’t forget the typical Malaga roll, the pitufo (literally Smurf). These ones might not be blue but they’re small and like molletes, are an essential ingredient for many Malaga breakfasts.

Most bars and cafés in Malaga serve molletes for breakfast. You can also buy them at La Canasta (Plaza de la Constitución and Calle Atarazanas).

CHECK OUT THE BEST PLACES FOR BREAKFAST IN MALAGA

We obviously couldn’t leave raisins off the list. Not only are they one of the most typical things to eat in Malaga they’re the vital ingredient for Malaga wine (see below). Grown in the Axarquía, the mountain region to the east of Malaga, dried raisins are at their best in the autumn, although you can buy them all year round. Malaga raisins are larger than sultanas and come with several pips in them.

If you’ve been on holiday to Malaga you’ll have noticed the local addition to churros and probably caught it yourself. But did you try tejeringos, the Malaga version of this deep-fried ultimate comfort food? These are smaller and thinner, and are fried in a circle. But they’re just as filling (and as calorific as churros!).

Where can you try tejeringos in Malaga?

Lots of local bars sell them as does Tejeringo’s Coffee on Calle Méndez Núñez.

DISCOVER THE BEST CHURROS IN TOWN!

Continuing the sweet things to eat in Malaga, next up are tortas de aceite, literally oil cookies. Made with olive oil, flour, sugar, anise and sesame, the most typical recipe comes from the village of Algarrobo in the Axarquía.

At La Mallorquina on Plaza Féliz Saenz and Princesa on Calle Granada.

This might be a drink but no list of typical things to eat in Malaga would be complete with mentioning Malaga wine. The sweet wine is probably the most famous, but in recent years Malaga reds, whites and sparkling wines have also made a name for themselves on the international circuit.

Antigua Casa de Guardia on the Alameda Principal is a great place to try the different types of sweet Malaga wine. If you’re looking for non-sweet, the best restaurants in Malaga include several local wines.

And last but not least and definitely unusual is the carrot. Not the humble orange kind, but purple, big and fat. Known as the zanahoria morá in Cuevas Bajas, a village to the north of Malaga where it is grown, this purple carrot has weigh up a kilo and be as long as 30cm. Its richer in fibre and vitamins than its orange sister and is used in jams, gazpacho and soups as well as eaten raw. This is a winter vegetable although you can buy dried zanahoria morá in some health food shops.

Between December and February, you’ll find purple carrots on sale at Atarazanas Market.